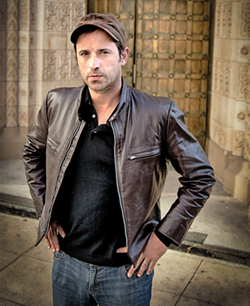 The nation went into a frenzy last December when the screen adaption of Michigan author Josh Malerman's novel Bird Box became the last great meme of 2018.

The film, starring Sandra Bullock, tells the eerie tale of a woman fleeing down river from an unknown terror with two young children in tow — all while completely blindfolded. The runaway success of the Netflix film helped to launch the author (and High Strung frontman) into the spotlight as the movie and subsequent memes made the rounds on social media.

Related Josh Malerman on the runaway success of his novel-turned-movie, ‘Bird Box’

Josh Malerman on the runaway success of his novel-turned-movie, ‘Bird Box’
By Jeff Milo
Movies
Just a few months later and Malerman is back working on a new film adaption, this time for his novel Black Mad Wheel. Partnering up with Detroit-based film and television producers Atlas Industries, the project intends to give the big screen treatment to Malerman's conspiracy thriller about fictional Detroit rock band the Danes.

“This project is proof that you don’t need to be based in Hollywood to produce films and television at the highest level," says director and producer Sean O'Grady. "With the right partners, focus and drive, Michiganders can play a role in making tomorrow’s blockbuster or cult classic."

You can thank Michigan author Josh Malerman for the last great meme of 2018
By Devin Culham
The Scene
Malerman isn't too far from the pen, however. The Ferndale-based author is also collaborating with Atlas Industries on a new feature-length screenplay entitled Only Children.