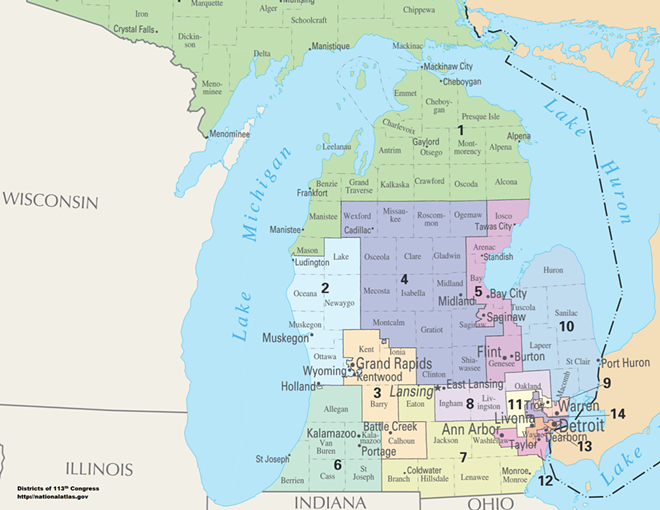 A panel of federal judges just ruled that Michigan's Republican-led House and Senate must redraw the state's legislative and congressional districts in time for the 2020 election. The lawsuit was brought by Democrats and the nonpartisan League of Women Voters.

No shocker here. The maps were so obviously rigged in favor of Republicans that some experts have said they were among the worst in the nation. Last year, emails surfaced that showed Michigan's Republican lawmakers rigged the maps with the express intent to screw over Democrats when they drew them up in 2011. In one email, a GOP staffer gloated that the maps would cram "Dem garbage" into just four metro Detroit districts. In another email, a Michigan Chamber of Commerce executive predicted the redrawn maps would keep the Republicans in power for years.

Now, the Federal judges have ruled Michigan's GOP-led House and Senate must redraw the maps before Aug. 1 and present them to Democratic Gov. Gretchen Whitmer to sign into law. Per order of the judge, the process must be public and transparent.

"Today, this Court joins the growing chorus of federal courts that have, in recent years, held that partisan gerrymandering is unconstitutional," U.S. Circuit Court Judge Eric Clay wrote in a 146-page opinion.

"Federal courts must not abdicate their responsibility to protect American voters from this unconstitutional and pernicious practice that undermines our democracy," they continue. "Federal courts’ failure to protect marginalized voters’ constitutional rights will only increase the citizenry’s growing disenchantment with, and disillusionment in, our democracy, further weaken our democratic institutions, and threaten the credibility of the judicial branch."

Widespread disgust of the gerrymandered maps helped drive a grassroots effort to get an anti-gerrymandering proposal on last November's ballot, which passed with more than 60 percent support. An independent citizens' commission will be formed from four Democrats, four Republicans, and five independents randomly selected by the secretary of state to help draw the new maps, starting in 2022.

Judge Clay's opinion is below. The GOP could potentially appeal to the U.S. Supreme Court.