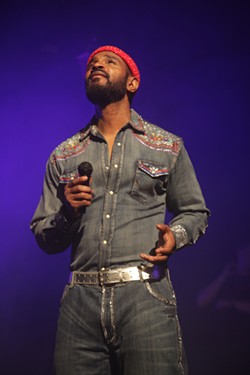 It’s no secret that Motown’s Marvin Gaye was masterful at creating iconic and very sensual love songs. Pride & Joy: The Marvin Gaye Musical gives some context as to how the legend has become a posthumous romantic revolutionary.

Set against the sociopolitical backdrop of the 1960s, the musical features 28 songs spanning Gaye’s catalog as well as the Motown songbook. Pride & Joy also focuses on his early career as a session musician at Berry Gordy’s Hitsville USA, where he would eventually go on to record What’s Going On and meet his first wife and Gordy’s sister, Anna.