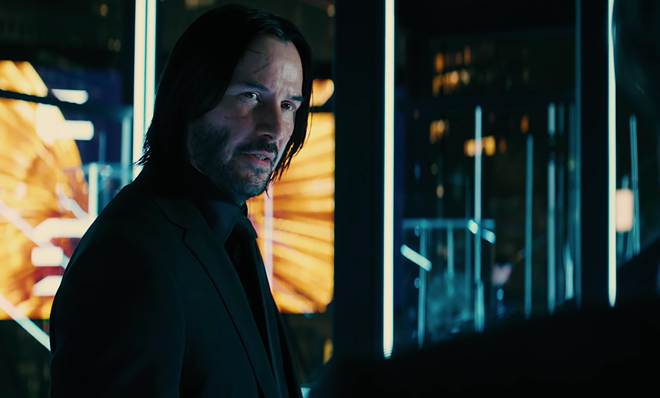 Opening after a warning — that in an hour there will be war — the third and newest John Wick opens with Keanu Reeves’ unretired, high-class assassin eyeing a bounty on his head, this time as punishment from the chairs of the world-spanning coven of assassins of which he’s long been a distinguished member, an elite (elitist?) council known as the High Table. Having violated their rules by killing in a demilitarized zone (see Chapter Two for the extenuating circumstances), he’s forced to fight, bargain, and sprint his way toward any chance of survival.

The odds, given his prowess, don’t seem so poor. Throughout John Wick: Chapter 3 — Parabellum, Wick blows through hordes of faceless mercenaries by arming himself with knives, guns, a horse, and in one scene a book, along with his own battered but able self — for in this world assassins lie disguised all around him, as food vendors, homeless persons, commuters… everywhere. Just as they did in Chapter Two.

This sameness proves a problem for much of the film. Treading water in the extralegal, underground world of rules and codes established in parts 1 and 2, Parabellum lacks the first film’s elemental, honed, and scrappy qualities as well as the second’s mythic, existential sweep. Unfortunately, it’s missing their shared aura of building — especially outside of its action scenes — something genuinely new.

Particularly in its first hour, director Chad Stahelski (a stalwart on all three, though David Leitch co-directed the first) seems to languish in the territory marked out before. Dwelling inconsistently on Wick and cutting often to meetings between the High Table’s adjudicator (Asia Kate Dillon, playing a kind of code enforcer for her organization) and Wick’s old allies, we watch one by one as she doles out harsh and violent punishment to those who’ve lent him any kind of aid, making martyrs of the film’s supporting cast but without much clarity as to what end. Meanwhile, Wick beseeches old and new peers for help, bargaining and calling in favors — leaving the film to hover around ornate negotiating tables without committing to really delve into their dynamics in the manner of (for instance) Kill Bill or even the prior films. Only at intervals is the promise of a kind of defensive war against Wick really made good on, and what takes its place isn’t hearty enough to sate.

Despite those flaws, much is maintained here with regard to form. Dan Laustsen’s cinematography is as game as ever, glossing a Mardi Gras spectrum of lights (greens, golds, and fuschias) in torrential rain to excellent effect. Lens flares blossom in his frames like rogue but welcome flowering weeds — which is to say quite naturally — and the air, particularly in New York, is one of sweetly intimate nostalgia, something I’m rarely taken by. Action takes place in attics that aren’t yet lofts, warehouses that aren’t yet mixed-use developments, and cabs still kick around, yet to be replaced by today’s omnipresent waves of Ubers. The architectural, design, and wardrobe motifs range from gothic to goth-y to art-deco, with the crew favoring locations that feel N.Y.-classical as well as specific.

Though disappointingly inconsistent, the action scenes at their strongest are endurance runs of care and invention — like in one early one in which combatants hurl knives down an aisle like snowballs, fighting on, even when hit in the arm or shoulder. And yet many of them feel less energized than in films previous, depending on the use of animals, recurring gags, and odd gimmicks that visibly failed to inspire. Like the rites of the assassins depicted, the fights, rituals, travel, and negotiation feel suddenly quite ritualized, made rote. Events feel less weighted with any kind of great significance than they do enacted for the sake of their own (the franchise’s?) perpetuation. Such is the trouble with Marvel’s stable of films, with most any that determinedly follow the Hero’s Journey, and those that visibly follow the money over their own art: in other words, the kinds of movies these never felt like.

In Parabellum, some of the lack feels easy to pinpoint. One reward of the prior installments was that each assassin that took a shot at Wick had a visible way about them, a character actor’s instant aura of a manner, style, and point of view. Here (as in football), the assailants are largely masked, uniformed, or S.W.A.T.-suited. When they’re not, the camera often fails to dwell on their respective faces, postures, and vibes, losing who they are, if it ever really knew. To do so — to know them — has a way of grounding the action, solidifying the threat, and making real Wick’s foes; empathetically, it’s worth understanding that Wick is a standout amid a troupe of career assassins very much like himself. The question of what sets him apart isn’t just about whether he’s “better” (the answer thus far is always yes); it’s just as much about what sets him apart as a person, a character, and performer in his physicality — what makes Wick, or Reeves, worth watching over those who trail him.

As for better, Reeves earns that designation convincingly — I’m no martial artist, but his stamina’s clearly exceptional. Now 54, he’s able to move with extraordinary agility, his face set in a steady, reluctant grimace put in boldface by his beard and mustache. The cool expression on his face as he reloads a gun, like the fluidity of his suited movements, remains — as ever — something to see, as he’s been doing this for a very long time now. Slow-motion’s not needed here to imbue his turns and leaps with a cultivated grace, and for an action star he seems in a welcome way to lack machismo. As he grows older he scans as very much a character, flattered here by a part that’s made precisely for him, and he reads, like Wick himself, as his own man, bending the series around him and testing his ability to make his own rules. Nonetheless, those actions lose something when they lack purpose, part of a movie spiraling, unwieldy, into its own world and over much old ground with no air of finality or really great stakes. It’s possible Stahelski feels emboldened by what’s now become a booming franchise to repeat himself, attempting to give the folks that buoyed him up on Reddit or Rotten Tomatoes what they want. But pockmarked as it is by grandstanding, gimmicks, undercooked scenes, and repetitions — all in sorry contrast to its great potential — Parabellum feels, unlike its forebears, less like an exception than it does the rule.