Bird up! Eric André will bring subversive ranch dressing-covered comedy to the Fillmore 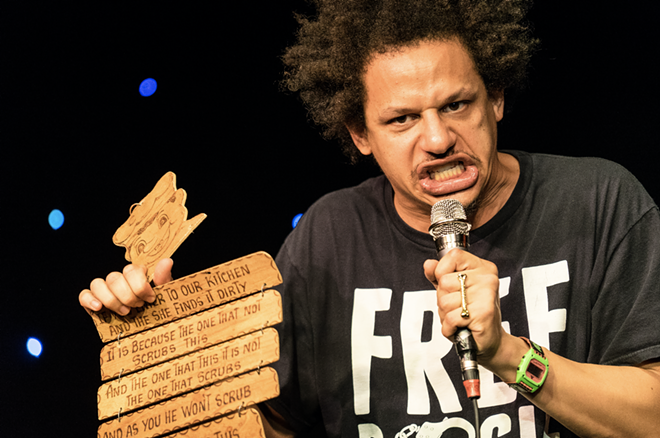 If you think Scientology founder L. Ron Hubbard was a Black man, have an affinity for ranch dressing, watched the movie Precious in 3D on magic mushrooms, or puked in front of esteemed guest and star of MTV's The Hills, Lauren Conrad, you might just have an Eric André problem. Or an STD.

The comedic madman behind the delightfully demented NSFL (that's not safe for life, by the way) Adult Swim series The Eric André Show has announced the “Legalize Everything Tour” which will pay a sticky visit to Detroit's Fillmore on Sept. 27.

In the past, André has attempted to recreate the disorienting and self-destructing format of his talk show on the road, but for his upcoming world jaunt, his biggest to date, the pro-ranch advocate will return to his stand-up roots.

This latest tour might not be the only thing André has in the works as folks are beginning to think André is pulling an Andy Kaufman/Tony Clifton-level stunt. Last week, the comedian announced the release of the debut album by an artist by the name of BLARF. The album, which is due out on June 26 on Stones Throw, prompted Pitchfork to ask BLARF whether or not they were connected to the André. BLARF's response? “Who the fuck is that?”

Tickets go on sale starting Friday, June 15 at 10 a.m. and can be purchased here.
Get our top picks for the best events in Detroit every Thursday morning. Sign up for our events newsletter.