For the past three years, Detroit-based artist, Gisela McDaniel, has retold her multiple experiences with sexual trauma almost every time she's picked up a paintbrush. But she did so willingly, as part of her debut solo exhibition Lush P(r)ose — which debuts at Playground Detroit on Saturday, June 15 — and has reclaimed her power by doing so.

“It's been interesting telling my story over and over again, too,” she says, “I feel that I've come a long way with not only understanding my story but also owning it and moving forward.”

The project, which has taken nearly three years to complete, relied on the willingness of McDaniel's subjects to be vulnerable — both in body and experience. Composed of large-scale textural oil paintings, Lush P(r)ose also incorporates altered audio from McDaniel's painting sessions, during which her subjects shared as much or as little about their experiences with sexual trauma as they felt comfortable, while also posing partially, and in some cases fully, nude. If the subject wanted, McDaniel would share her story first so that the women felt a sense of kinship and comfort in their own healing.

“I think the power in these pieces comes from the moment I capture the subject,” she says.

“Many have expressed feeling empowered by the opportunity to be heard. Many of us walk around carrying very heavy experiences. Giving someone the opportunity to release some of that grief can be very intense. That being said, I think the energy that exists right after these interviews is calm. Capturing a moment of moving forward is powerful in itself.” 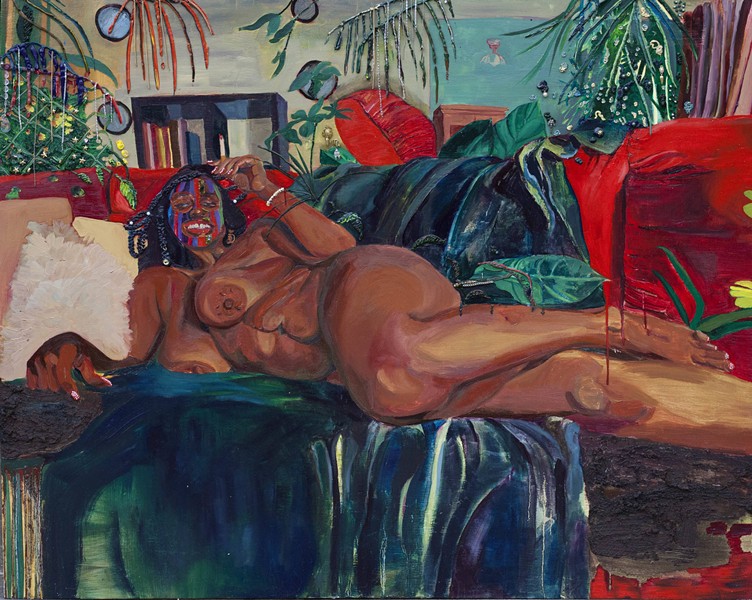 A Cleveland-native with her BFA from the University of Michigan, as a creator, McDaniel often identifies as a Diasporic indigenous Chamorro feminist artist. For the past two years, she's lived in Detroit and says it feels like home.

“The community has been very kind to me and people here have big and honest hearts. I appreciate that so much.”

A striking and notable feature in her recent portraits of female-identifying survivors is the background of the paintings. Though each one varies portrait to portrait, as McDaniel says she gave the women the option to conduct the session in their space (“Safety, comfort, and respect are so important,” she says of this), there is a common thread — rich jewel tones draped over and around prismatic nude skin, with a stunningly cluttered array of plants, fabrics, and flora. McDaniel says this choice harkens to her Chamorro heritage and that the colors are a nod to post-Impressionist Gauguin.

“I'd like to reappropriate his colors and landscapes, as a pacific islander woman, for my own,” she says. “By reversing his gazer I give power to the subjects I am painting.”

While this process may have started out as a way for McDaniel to confront her own healing, it's become a lesson in listening. More than anything, though, she hopes that people viewing her work are empowered by the strength of her subjects' ability to share parts of themselves by taking ownership of their narratives. She also wishes that these intimate portraits and audio clips will serve as a means to acknowledge each individual's pain, without invalidating the feelings of others by comparing experiences. "No one's pain is less valid than anyone else's," McDaniel says.

But mostly, she says, it comes down to healing.

“Something that was shared with me in one of the interviews that I haven't been able to forget is that healing takes work, and sometimes that work is difficult and we don't want to do it, but it is necessary.”