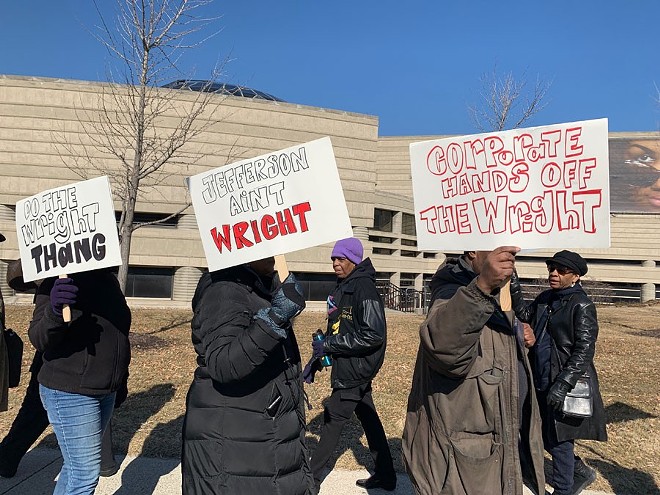 A controversial exhibit that focuses on the lives and legacies of six enslaved Black families at Thomas Jefferson’s Virginia plantation will close on June 22, capping a three-month run at Detroit's Charles H. Wright Museum of African American History.

Slavery at Jefferson’s Monticello: Paradox of Liberty will end with a lecture and book signing by historian Annette Gordon-Reed, author of Thomas Jefferson and Sally Hemings: An American Controversy, from 7 p.m. until 8:30 p.m. on Tuesday, June 20. The event includes a Q&A moderated by the museum's vice president of programs and public engagement, Charles Ezra Ferrell.

The exhibit drew dozens of protestors on its first day, who complained that the display put Jefferson — who owned 600 slaves, including his own children — at the center of the show’s narrative, presented literally on a pedestal. Hemings, a little-known figure in history, was a slave with whom Jefferson had a long-term sexual affair and who gave birth to five of his children, starting when she was just 16. At the opening, protesters chanted "Jefferson was a racist, Jefferson was a pedophile."

Thomas Jefferson is canceled (or at least a Detroit group thinks an exhibition about the slave-owner should be)
By Lee DeVito
Culture
The exhibition presents more than 300 objects including works of art, documents, and artifacts from Monticello, as well as oral histories of descendants of enslaved families who lived on the plantation. The exhibition was initially curated in 2012 by the Smithsonian Museum of African American History and Culture in partnership with the Thomas Jefferson Foundation at Monticello and has been seen by more than one million visitors at museums in Washington D.C., Atlanta, St. Louis, Philadelphia, and Dallas.

In a Detroit Free Press essay, Wright Museum CEO Neil A. Barclay wrote that he would not pull the exhibit following the protests, and encouraged Detroiters to see the exhibition and consider its merits for themselves.

“We at the Wright Museum feel a responsibility to ensure that our take on this unique American story reflects our status as a preserver and champion of African American history,” he wrote, adding that the museum’s presentation of the show differs from previous iterations because it shifts the focus to the enslaved families.

“The exhibition puts the lives of six enslaved families who lived at Monticello at the center of the narrative, presenting them as fully-realized humans who navigated slavery’s pain, loss, and unspeakable oppression with resilience and faith, and not just plot devices for a story about Jefferson,” said Barclay.
“It rescues these American voices from obscurity, recognizing their unique perspective on American history and how the twisted legacy of slavery shaped it.”