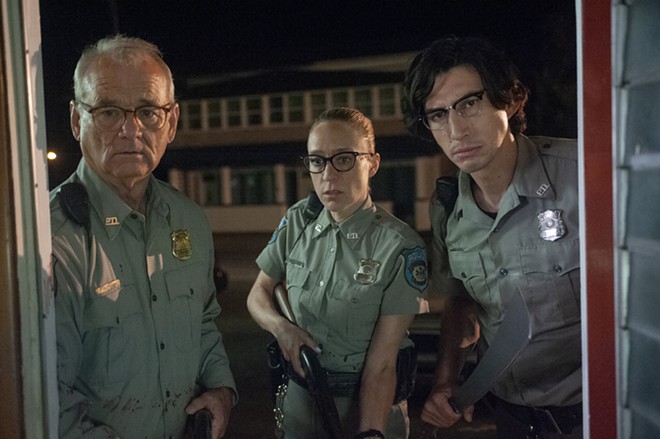 Turning on the relatably apocalyptic notion that the Earth has tilted off its axis, reanimating our bygone foes and loved ones, The Dead Don’t Die seeks to make soft satire of our present. A zombie film alternatively too coy and too obvious for its own good, watching it feels like going on a date with someone who talks only about themselves — even though you might have been initially curious to know them.

Throughout its short length, the characters discuss repeatedly: George A. Romero, zombies, the film's title Sturgill Simpson track, whether what is happening could actually be happening, and (a major motif) whether things will end well. Eventually there are nods even to the film’s production. In this, as in his locally-set vampire flick Only Lovers Left Alive, Jarmusch treads with languid comfort on the cliches of his chosen genre. Though this is a fine-looking movie with its wallpapered interiors and its hovering car shots, it’s done with less style and a deeper sense of nostalgia here than that other work — maybe in part because it’s of a less rich genre.

It’s hard not to do more than nod drowsily at the mention of a zombie story these days; those who trespass against the Romero framework are assumed to be under-versed, while those who hew to close to it will never be as good. Whatever level of respectful distance is embraced, the head-shots, rural milieus, and hauntings by dead parents have come to feel like exercises in the familiar. It’s rare that any effort at genuine newness in it is met with positive reception (28 Days Later springs to mind as a rare exception), and often a gimmick is needed to imbue a sense of life.

Here the gimmick in question is our very own Bill Murray, whose deadpan deliveries as small-town protector Sheriff Cliff, alongside Deputy Ronnie (Adam Driver), offer some bemused interest before losing any air of novelty; Jarmusch fails ultimately to make his lead role much more than an an extended cameo, though for a lot of viewers he may provide sufficient value to shield this thing from scrutiny.

I’m not among them. To me “Bill Murray fighting zombies” sounds like a dated, drinking game-style mashup, and though the movie’s riddled with charming performers (Steve Buscemi, Tom Waits, Chloë Sevigny, Tilda Swinton) it’s hard to feel that they don’t overwhelm and undermine the setting of Centerville, the film’s small Pennsylvania town. With its endlessly repeating title track, its off-kilter characterizations, and its screwball timing, much of what’s here feels like it might have been made or shaped the way it has been off of a bet or a dare.

Like many (maybe even most) Jarmusch movies, this one feels like an excuse to hang out with (and in some way celebrate) his posse of wealthy and talented friends. But as it seeks another raison d'être over its wandering course, it stumbles — after Romero — on social satire as its best option. Reanimated, the zombie denizens of the Centerville recite the cravings and consumerist wants they had in life. Coffee is the first, followed by wifi, guitars, cellphones, alcohol, and the like. Lifelong athletes shamble around soccer fields and tennis courts in death while former prisoners return to the yards of their captivity.

Romero is the obvious precedent; his ardent, deeply felt worries about consumerism, how we treat each other, and the overall direction of America both drove and plagued the late director’s filmography, but throughout those anxieties seems to come from a place of real concern. In Jarmusch’s riff here, the joke seems to be that we’re all dead or gone anyway, in essence — to my mind a poor man’s existentialism, devoid of empathy. To paraphrase the film’s suggestions (and the title song’s lyrics), “looking at our phones all the time/  we’re basically already dead” — so what’s the use in worrying about how things end?

Though ironic detachment has long been a hallmark of Jarmusch’s style (his projects often appear easily, even lazily made — regardless of production realities), he’s also traditionally found strength in distance. Letting characters in works from Stranger than Paradise to Dead Man and 2017’s Paterson speak via word and action for themselves, his air of emotional remove but still-evident artistic engagement (at least in terms of framing, shot duration, or shooting style) often casts a rich ambiguity on his story’s consequences — for the primary characters as well as whoever surrounds them. Throughout his work he’s unafraid to watch a character hang themselves through their mistakes.

In The Dead Don’t Die, though, this detached air and its resultant weightlessness feels more a symptom of a gilded lifestyle and old age (for him the sources of modern-day panic are light matters he can just read or not about) than a means to any narrative or thematic end. I’ll be the last to say The Dead Don’t is without charm or humor, but with its procession of cameos, its undercooked and weirdly crotchety satire, and its disinterest in its own borrowed narrative arc, it’s hard to find an animating reason for much of what’s on display here.

If Jarmusch can’t be bothered to care — or even to proffer any interesting observations — then why should we bother investing in this ourselves? If the movie’s lack of point is an in-joke (and it seems likely), its plot a knowing reanimation of its predecessors without real purpose beyond tepid enjoyment or an interest in their style, then it’s a very poor one, and not so modest an exercise as it might sound. You’d know in watching just as clearly as you might on a date — there’s no mistaking the air here for a humble one.
Stay on top of Detroit news and views. Sign up for our weekly issue newsletter delivered each Wednesday.