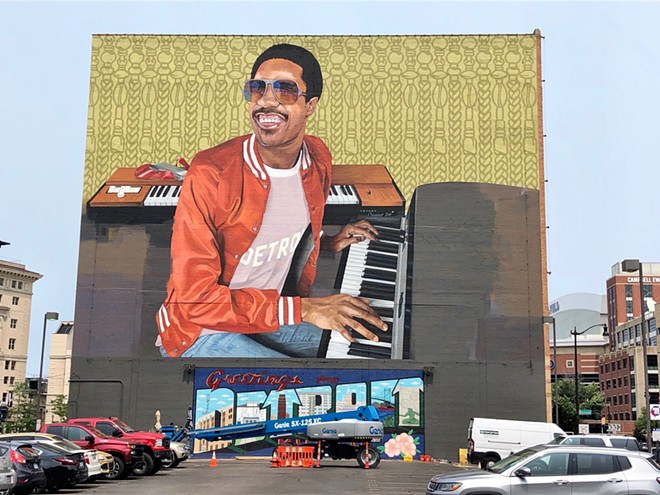 London-based artist Richard Wilson tells Metro Times that he put the finishing touches on the mural on Wednesday morning. The 100-foot-tall, 8,000-square-foot painting is located on the south wall of Detroit's Music Hall Center for the Performing Arts.

Wilson started the project on Wonder's 69th birthday in May. The project was supposed to only take a few weeks but was delayed by the heavy rains this spring and summer.

This year is also the 60th anniversary of Motown records.

The mural is being finished just as Wonder is in the news for other reasons. On Saturday, Wonder revealed to a concert audience in London that he was planning on having a kidney transplant in September. The singer will likely not perform again until 2020, pending his recovery.

Wilson started a second mural on Music Hall’s west wall a few weeks ago, depicting a boy standing in the interior of the Music Hall. The project, commissioned by the London-based nonprofit Education Is Not a Crime, aims to raise awareness of the need for arts education in Black communities.

This year’s Concert of Colors — the biggest yet — brings Motown to Midtown
By Lee DeVito
Local Music
Stay on top of Detroit news and views. Sign up for our weekly issue newsletter delivered each Wednesday.