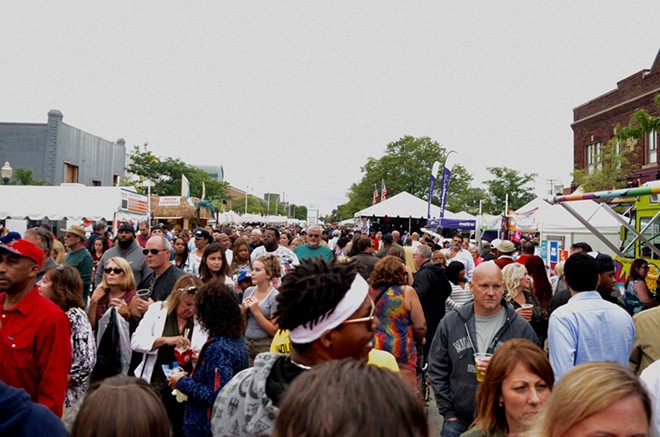 Last year, roughly 330,000 people flocked to downtown Royal Oak for the four-day festival. Headliners for the event include: Starship, All-American Rejects, Randy Houser, Phillip Phillips, Third Eye Blind, Night Ranger, and Theory of a Deadman. The entire lineup can be found at artsbeatseats.com.


More than 200 performances across nine stages will take place throughout the long weekend. The festival will feature 16 new local artists from across the state. Thornetta Davis, a blues artist from Detroit, and Black Tie Circus of Ferndale are two groups that will take the stage Labor Day weekend.


Jive Colossus, an 11-piece-ensemble that started in Ann Arbor, will play Afro-Caribbean tunes with touches of funk, R&B, and jazz.


Voices from the Royal Oak Children's Choir and the Detroit School of Rock and Pop Music will also perform at the festival this year.


On Saturday, Aug. 31, from 10 a.m. to 11 a.m, the Priority Health Zumbathon will take over the main stage as a fan favorite of longtime festivalgoers.


Artists participating in the annual juried fine art show will compete for a cash award of $7,500. Three new artists for this year's event include Soo Chang, a painter from Darien Illinois; Atticus McFadden-Keesling, a blacksmith from Clarkston; and John Hartung, a photographer from Clearwater, Florida.


Flagstar Bank will also showcase work from 15 winners of Oakland County’s Financial Literacy Art Contest, which awards high school students scholarships for college. In addition to the fine art at the festival, performances from Oakland Community College’s theatre program will also be on site.


Three new affordable food options include: Crispelli’s Bakery and Pizza, Wahlburgers, and Mezza Mediterranean Grill. There will also be two new food trucks, one from the Bavarian Inn in Frankenmuth known as the “Cluck Truck,” and another from Little Bros Burgers called “Lil Bros on Wheels.”


A new Smart Options program will be offered at participating food booths, which will have stickers notifying guests that a particular restaurant offers low-carb, low-fat, gluten-free, sugar-free, or vegan options.