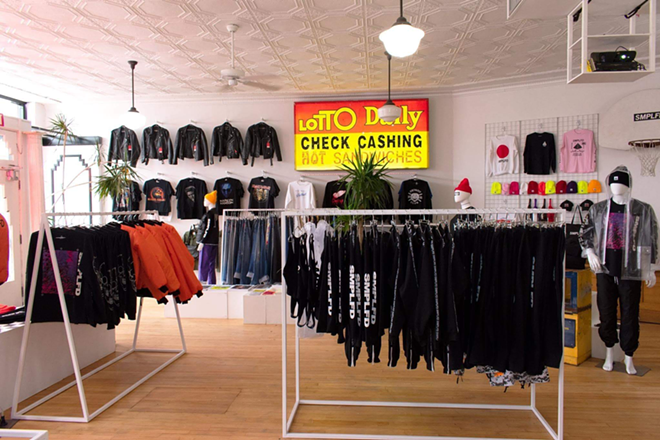 Detroit streetwear brand SMPLFD is moving out of its flagship retail location in Eastern Market next month. The store's last day on 1480 Gratiot Ave. is Sept. 1, according to the owners.

The spot was one of the anchors along a revitalized stretch of Gratiot Avenue, which had become a shopping destination in recent years thanks in part to SMPLFD and other businesses like print shop and gallery 1xRun, which opened in 2013. Other stores followed suit, like SMPLFD, which opened three years ago, as well the gift shop Well Done Goods and record store Peoples Records.

Like, 1xRun's move, SMPLFD says the move will allow the company to expand. The new space is 4,800 square feet, which the company says it will use to expand its screen printing operations, hire more staff, and expand its products. The new space will also include a live entertainment space as well as a bar, set to open later this year.

"We're excited for the opportunity to grow the production side of our business, while really honing in on what it means to be a clothing brand and company in 2019," SMPLFD creative director Vincent Troia says in a release. "While the current retail location is closing, we are looking to find a new, focused retail location in the next six to nine months. Until then, you’ll be able to find us online and in various retail pop-ups that’ll be announced soon."

The move comes as Eastern Market is undergoing rapid changes, with a number of businesses closing following developer Sanford Nelson's purchase of more than 20 buildings in the neighborhood over the past year. It also comes as Guyton is working to transform the Heidelberg Project into "Heidelberg 3.0," a more permanent version that is set to include a museum and artist studios.