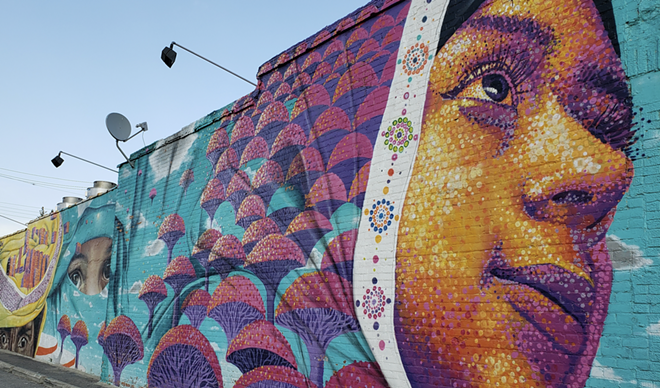 A vibrant mural celebrating Hamtramck's Yemeni culture is at risk of being erased.

The Hamtramck Review reports that the mural, originally commissioned by OneHamtramck at a cost of more than $20,000 and painted by artist Dasic Fernandez, is in jeopardy because Ali Al-Zuebairi, who owns the next-door lot, plans to construct a two-story retail and apartment building there.

A resolution to approve the project was pulled from a city council meeting earlier this month because of ongoing negotiations between OneHamtramck and Al-Zuebairi to sell the lot and build elsewhere. And city council candidate Mohammed Alsomiri, who owns the building the mural is on, told the Review he is considering purchasing the lot to save it.

In the meantime, a group has created a change.org petition to demand the mural be spared, writing:

The iconic mural portraying Yemeni heritage and culture in the city of Hamtramck can potentially be lost to us forever, and it hasn't even been with us for very long.

As a Yemeni woman who finds solace, home, and a sense of familiarity and love from this particular mural, the news of its possible blocking upsets me so much. As a born and bred Detroiter with my roots newly planted in this country but my ancestry rooted in Yemen, I can turn to my city, its people and its beautiful art anytime and anywhere. However, with my country in its current state of famine, destruction, and genocide, we have nothing else to look at with hope but ourselves, our families, and this mural. This kind reminder of our beautiful motherland is all that we have, and learning of its blocking is truly upsetting to me. That is why I am fighting it now. I demand a seat at the table of comfort, hospitality and second-chances in this country for my people, even more so now that my people are being banned, belittled, silenced, starved, and killed by the thousands.

I am demanding for them, and for every single person who has and will ever seek life, liberty, and a chance at pursuing happiness.