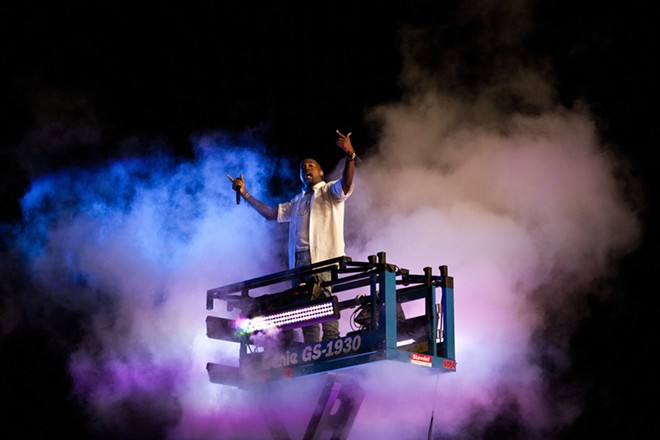 Looks like Kanye West intends to bring his "Sunday Service" event to Detroit, and the rapper is looking for local singers to help out.

Kanye West's free Detroit 'Sunday Service' show is coming to the Aretha on Friday
By Lee DeVito
City Slang
A publicist confirmed that the event is slated to happen this weekend, though a a final date and location have not yet been set. There's a call out for local soprano, tenor, and alto singers for a noon rehearsal on Friday; those interested in participating can register online here.

After launching "Sunday Service" in his hometown of Chicago, West took the show on this road this year, making stops at Coachella, Portland, Atlanta, and most recently in Cody, Wyoming. The services are typically free, announced on short notice, and feature a massive sing-along with a mix of traditional hymns and pop songs, including Nirvana's "Smells Like Teen Spirit" and West's own "Ultralight Beam."

Nearly 4,000 people were estimated to have attended the Cody, Wyoming event.


West has come under fire in recent years after making inflammatory statements pertaining to race, such as saying that he felt like slavery "was a choice" and voicing support for President Donald Trump on Saturday Night Live. Detroit radio station 105.1 The Bounce pulled the singer's catalog from its playlists in response.

Last year, West was given a tour of Detroit by businessman Dan Gilbert, which involved him giving an impromptu speech to students at the College for Creative Studies while standing on a table.

In November 2016, West cut his "Saint Pablo" tour short, and admitted himself into a Los Angeles hospital for nine days following episodes of hallucinations and paranoia. West later revealed he became addicted to opioids during that time.