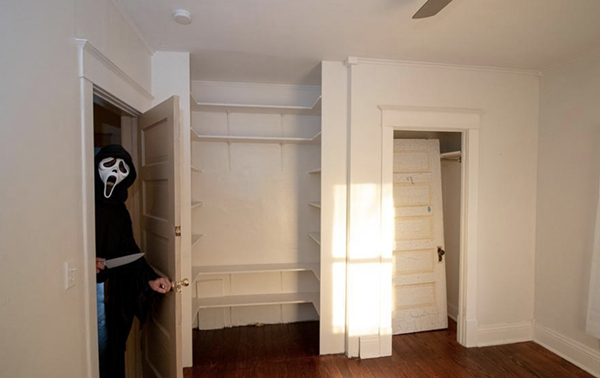 Do you like scary movies? What about a charming two-story home with four bedrooms, wood floors, historic architectural features, ample sunlight, and a totally clean, dry, non-murdery basement?

A real estate listing for a home in Lansing's Old Forest neighborhood has gone viral after realtor James Pyle decided to take a less than conventional approach when trying to sell the $105,000, century-old home by dressing up as the stabby ghost-faced killer from Wes Craven's Scream movie franchise (aka the reason answering a landline in the early 2000s was nightmare-inducing.)

The first image in the listing's slideshow features the seemingly innocuous exterior of the 1,568-square-foot home located at 809 N. Chestnut St., including a lush garden, a well-kept facade, an attached garage, and a welcoming covered porch. By closer examination, there's a friggin' murderer lurking on the porch, knife in hand. As you click through, the scary-killer guy appears to be pretty damn domesticated. He can be seen carving a pumpkin, raking leaves, doing some floor exercises, and even using the bathroom.

According to the Lansing State Journal, Pyle, who has been selling real estate in the Lansing area for 15 years, teamed up with photographer Bradley Johnson to create the images featured in the listing as a way to generate Pyle's desired “1,000 views.” The listing, which was posted on Friday, Sept. 27, has since amassed more than 20,000 views. Pyle also said that because of the viral listing, he was able to book several private showings before the open house, which took place on Sunday.

The full listing for the historic single-family nightmare on Chestnut Street can be viewed at zillow.com or century21.com.