What to expect at the 11th TEDxDetroit on Wednesday 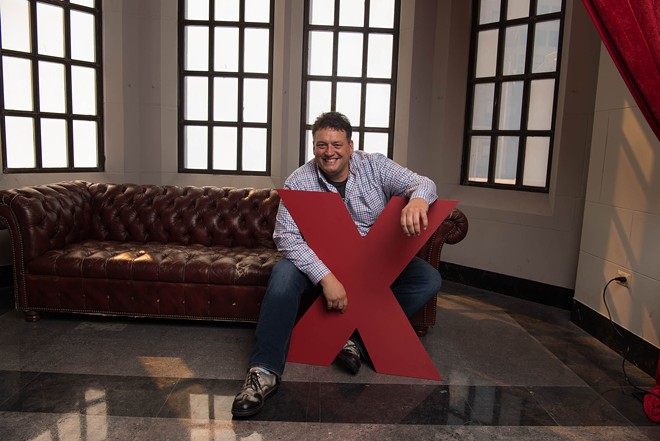 Charlie Wollborg says more than a decade ago, when he was working as a Detroit-based creative director, he was a fan of watching TED Talks.

"I had been watching TED videos online, like all the other geeks," he says. "But to go to the conference it was like $10,000, and you could never get in."

Then, around a decade ago, TED got the idea to launch the TEDx program, which would host smaller, local TED events in cities around the world.

Wollborg has served as a curator for TEDxDetroit ever since. On Wednesday, the 11th annual TEDxDetroit will return to Detroit's Masonic Temple.

Long before it became a meme, TED Talks started in 1984 as a dinner party. "The guy who started it said, 'You know, what if I invited people from different professions to dinner and had them share ideas?'" Wollborg says. No, the founder's name wasn't Ted; it's an acronym for "Technology, Entertainment, and Design." (His name is Richard Saul Wurman.)

"His thought was, these are three fields that drive innovation across the economy," Wollborg says. The first TED featured early demos of the compact disc and Apple computer.

"Creativity is all about cross-pollination," Wollborg says. "So by bringing the people from different fields together, that's how you spur new ideas. Innovation isn't really coming up with something new. It's about putting things that are already proven in new and exciting ways."

"You know, it's putting the peanut butter in the chocolate gives us Reese's," he says.

Wollborg says the idea behind the first TEDxDetroit was to highlight creatives during the Great Recession.

"If you remember the news back then, everything was burning, bleeding, and bankrupt," Wollborg says. "So this was kind of a cure for the panic attacks of listening to the local news. We wanted to shine a light on people who are creating. Yes, the automotive industry may be laying off thousands of people, but there are also artists and entrepreneurs who are starting new projects and doing cool collaborations."

Some of the initial TEDxDetoit speakers included Fox 2 anchor Lee Thomas, who talked about his skin condition vitiligo, and Dawn white, an Ann Arbor entrepreneur who talked about wind energy.

"It was just a hodgepodge," Wollborg says. "It was a much smaller thing. We just had it in a classroom at Lawrence Tech, uh, and it was something we threw together in a couple of weeks."

As the years went on, TEDxDetroit moved to bigger venues: the DIA, Orchestra Hall, Cobo Center, the Detroit Opera House, the Fox Theatre. This year, it will be hosted for the second year at the Masonic Temple.

Wollborg says that while the production may be slicker and the venue bigger, that idea of "hodgepodge" remains. Some of this year's speakers include April Anderson of Good Cakes and Bakes, longtime Eminem collaborator Luis Resto, Nicole Curtis of home-improvement show Rehab Addict, and cartoon voice actor Rob Paulsen. The event also features a rare TED Talk duo in Shaka Senghor, New York Times best-selling author of Writing My Wrongs, who will be joined by fellow author Ebony Roberts.

TEDxDetroit runs from 8 a.m. to 6 p.m. on Wednesday, Nov. 6, at the Masonic Temple, 500 Temple St., Detroit. More information is available at tedxdetroit.com. Tickets are $125.