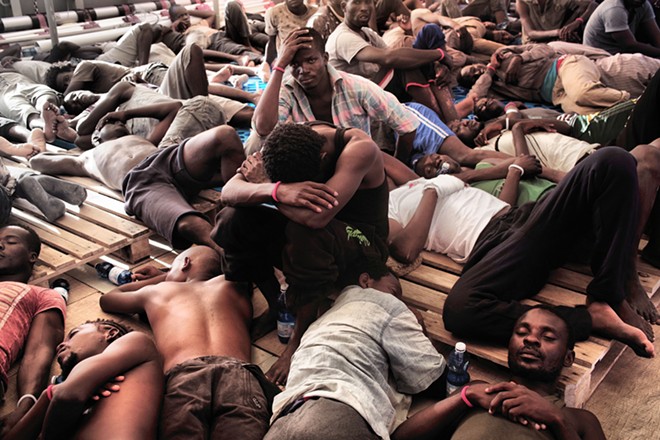 For his latest solo exhibition, Detroit photographer Kenny Karpov took to the Mediterranean Sea for a closer look at Europe's refugee crisis.

Many of the photos show Black bodies packed onto ship decks, calling to mind a modern-day slave ship. What gets lost in the mainstream media narrative of the refugees, Karpov believes, is that any of the African and Middle Eastern refugees are in fact fleeing the horrors of modern-day slavery, human trafficking, famine, and war.

"As the media, we don't ask questions about why they're fleeing," Karpov says. "We just assume that they want a better opportunity."

The photos are the culmination of the last four and a half years of work, in which Karpov accompanied rescue crews from the German-based non-governmental organization Sea-Watch. Karpov says he interviewed more than 200 people over the course of the four years.

The origins of the project trace back to 2014, when Karpov was working as a freelancer for big outlets like the BBC and The New York Times in Washington, D.C. and New York. But he says he at times felt disillusioned with how the mainstream outlets handled the topic.

"One of the editors that I worked with didn't really seem to care too much about the people that we were interviewing," he says.

Karpov says he began to work with various nonprofits that helped refugees resettle and learn English. Later, when Europe's migrant crisis began to make headlines, he partnered with a Washington, D.C.-based nonprofit that took him to Syria and Lebanon for a few weeks.

"I kind of realized that that's what I wanted to do," he says. "I was like this is what I'm meant to do. This is my calling."

That's when he joined Sea-Watch, a group that meets migrant boats in international waters in the Mediterranean, offering medical supplies and other help.

As a Russian-American, Karpov says he likes to shoot on an old Soviet-style camera, the Kiev-19. "When I moved to New York at a young age, I started doing street photography with that camera," he says. "But those don't last very long — they're made of plastic essentially. I've probably been through at least like three of those."

Karpov says he also likes to use Russian lenses and expired Russian and Yugoslavian film, which he says helps add a timeless element to the images, making it look like the photos were from "a different era," he says.

The title of the show is Despite It All We Never Learn, meant to connect the current crisis to others throughout history. "I really wanted kind of capture that because we never learned," he says. "It kind of goes to show that we have not learned from like past mistakes. We had the largest migration crisis with World War II, and now the biggest migration crisis, which is the one in the Mediterranean."

Karpov says the experience was eye-opening for him, and he hopes it can be the same for people who come to the exhibition.

"I didn't really know that there were so many people moving en masse," he says. "And that's what I witnessed — their lives on the line, risking everything for freedom, for safety. And then to see the fear on their faces, but also the relief when they made it, was just completely like overwhelming and beautiful at the same time."

Despite It All We Never Learn has an opening reception from 6-9 p.m. on Friday, Nov. 22 at M Contemporary, 205 E. Nine Mile Rd. Ferndale,. mcontemporaryart.com. Runs through Dec. 14.