Artist John Sims looks at his childhood neighborhood in 'Sorrento: Portrait of a Detroit Block' 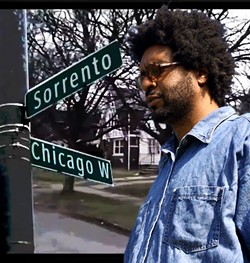 Last year, Detroit’s Irwin House Global Art Center & Gallery opened its doors earlier than originally planned following the death of Aretha Franklin, who grew up nearby, in order to mount an exhibition dedicated to her life. Artist John Sims, a curator for that first show, is wrapping up a stint as the gallery’s first artist-in-residence, which is also inspired by the neighborhood he grew up in — in this case, Sims’ west side neighborhood at Sorrento Avenue and West Chicago Street.

John Sims, a regular Renaissance man, returns to Detroit for lecture
By Lee DeVito
The Scene
The three-part multimedia project, which is described as “Sims’ deeply personal response to the decay and desolation of his home street,” includes a visually enhanced “VideoPoem” (the poem is included in M.L. Liebler’s Respect, also featured in this week’s issue), a print installation that mimics the experience of walking down the block, and a book.