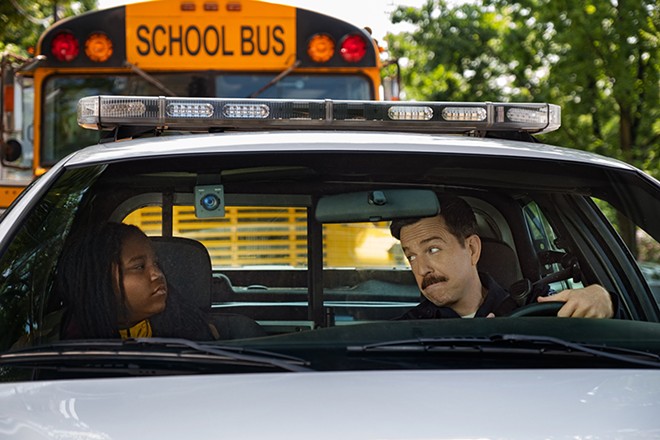 OK — so, maybe this raunchy buddy-cop movie isn't gunning for a top spot in the pantheon of classic Detroit movies, but it might make us forget about this dystopian hellscape we're currently living in.

Ed Helms (The Hangover, The Office) stars as James Coffee, a bumbling Detroit cop in the throes of a new relationship with Vanessa Manning, played by Henson. Meanwhile, her 12-year-old son, Kareem (Terrence Little Gardenhigh) is all but pleased with his mother's new mustachioed gentleman caller.

“Pig stuck his dick in the wrong blanket,” Kareem says.

So, in an attempt to cut him out of the picture, Kareem attempts to casually hire some criminal fugitives only to unknowingly uncover a massive criminal enterprise. Can you see where this is going? An action-packed, expletive-fueled life-or-death chase through Detroit ensues.

Though not many recognizable Detroit spots or landmarks are featured in the trailer — save for the Detroit skyline and a glittering Michigan Avenue strip club, Club Venus — we suspect this movie might leave us with a tinge of nostalgia considering, you know, we have no idea when we'll be able to rage in Detroit again.

For now, we have movies.