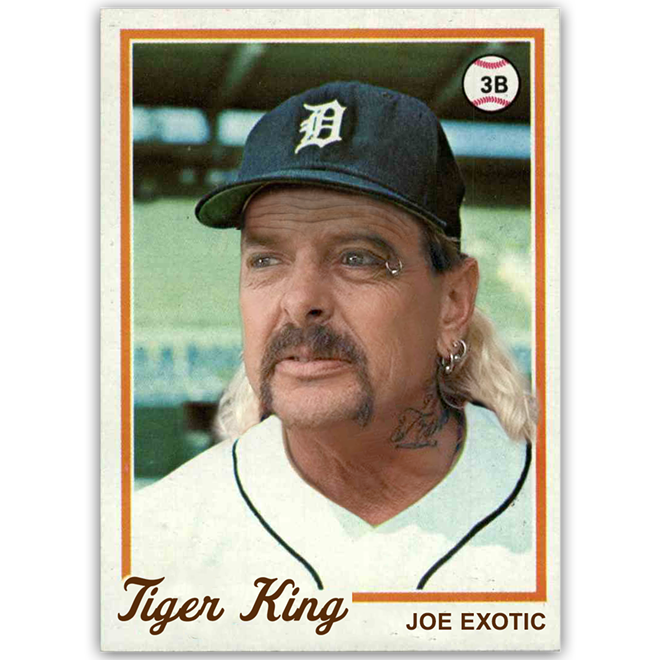 Just as cities and states all across the country instructed residents to self-quarantine to prevent the spread of the deadly COVID-19 coronavirus, the Netflix gods did us a fucking solid.

They gave us Tiger King: Murder, Mayhem, and Madness, an all-access pass to a world within a world within a fever dream within a precautionary tale. You know how in Men in Black there's an entire galaxy is contained inside that little cat collar? The same can be said for each and every one of enigmatic Tiger King star Joe Exotic's many piercing holes — and we, the scared and shut-in masses, have been sucked in.

Detroit should be recovering from epic Tigers opening day hangovers. Instead, we're pulling our hair out over the ever-crashing, over-taxed unemployment website, and wondering when we will experience the spontaneity of human touch, and, of course, the thrill of a baseball game, no matter how bad the team might be.

Amid this bleak backdrop, local meme lord Andrew Kozinski, who runs the Instagram account @pfmemeschinabistro, gave Detroit the MVP (that's "most vindictive prisoner," for you cool cats and kittens) it so desperately needs now: Joe Exotic, the undisputed tiger king, whom he imposed on a 1978 Detroit Tigers baseball card.


“I was the guy behind all the Golden Butthole stuff,” Kozinski says over Instagram message. The Golden Butthole, of course, was the nickname given to the city of Sterling Heights' $300,000 monument erected along Hall Road last year that, yeah, kind of looks like a butthole.

Kozinski says he loved the Netflix series and because of opening day, the idea just clicked. “Plus,” he says, “his mullet hair makes for a great baseball card.”

To catch the, like, six people who haven't treated themselves to the escapist journey that is Tiger King up to speed, here you go: Joe Exotic was the eccentric owner of the Wynnewood Exotic Animal Park in Oklahoma. Exotic is described by Tiger King's other prominently featured pony-tailed personality and rival exotic animal owner/trainer Doc Antle as a “completely insane, gay, gun-toting, drug-addict fanatic.”

Exotic ran for President in 2016 and again for Governor in 2018. Oh, and he's currently serving a 22-year sentence for illegal exotic animal trade (he was charged with selling a lion cub just two weeks after it was born) as well as for killing five tigers to make room. He's also jailed for his failed murder to hire plot aimed at yet another tiger owner and advocate, Carole Baskins, with whom he has maintained a vicious feud with for years. Flower-crown wearing Baskins is also alleged to have fed her estranged never-to-be-found ex-husband to her tigers, another plot twist which served as the inspiration for Joe Exotic's music video, “Here Kitty, Kitty” because, oh yeah, he also makes country music videos.

“I'm a senior art director by title,” Kozinski says. “So I am always creating fun content to make people laugh [especially] during this uncertain time.”

Thank you for your service, Andrew.