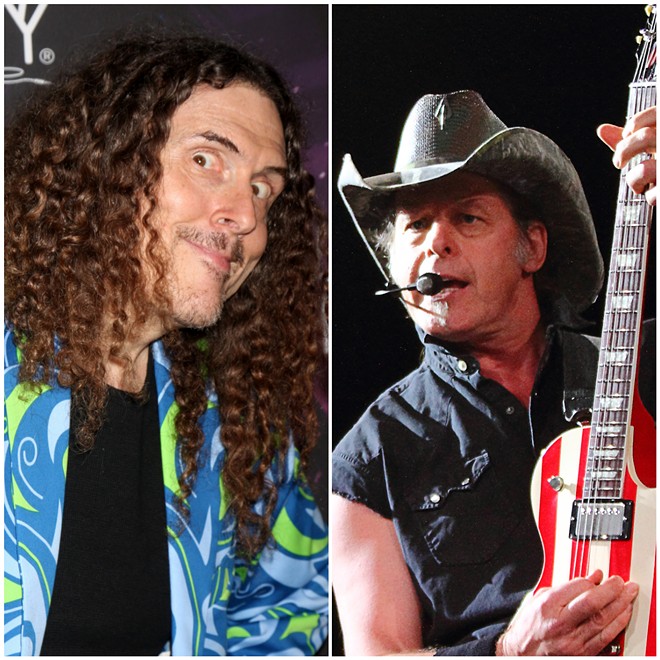 Eleven years after the bumbling, incompetent, new boot goofin' sheriffs of Reno 911! turned in their badges, the gang is returning for a seventh season, which will include an appearance by "Weird Al" Yankovic as Ted Nugent.

The Comedy Central mockumentary-style series, which was canceled in 2009 after six seasons of debauchery, mishandled crime scenes, and Terry, has been revived by the new subscription streaming service Quibi, and is set to debut on Monday, May 4 with new episodes each day.

The Prince of Parody took to Twitter on Wednesday to share a photo from his upcoming appearance on Reno 911!, in which the “Amish Paradise” singer takes on the Motor City Madman, Ted Nugent, disconcerting facial hair and all.

“Finally some good news in the world,” Yankovic wrote. “After an 11-year hiatus, one of the funniest shows of all time is BACK!”

The photo features Thomas Lennon reprising his role as Lieutenant Jim Dangle, Kerri Kenney-Silver as Deputy Trudy Wiegel, and Robert Ben Garant as Deputy Travis Junior alongside Yankovic in character (and someone who looks an awful lot like Nugent-lite and fellow Michigan-bred Trumper, Kid Rock).

For those not keeping tabs on Nugent (because why would you?), he's been active on social media selling autographed hunting arrows and red MAGA-style hats that say “Re-elect that motherfucker” — a conservative spin on Michigan congresswoman Rashida Tlaib's 2019 comments, which she used for her own line of merch. He's also busy posting a slew of anti-Whitmer memes, hawking ozone generators, and anti-coronavirus vaccine propaganda. In other words, business as usual.

Finally, some good news in the world - after an 11-year hiatus, one of the funniest shows of all time is BACK! The new season of Reno 911 begins streaming on @Quibi on May 4. (Oh, and I show up at one point as Ted Nugent.) pic.twitter.com/q2IO5T8IDD


The reboot of Reno 911! is the latest series to debut following Quibi's $175 billion launch fail earlier this month.

The streaming platform designed for watching shows on the go struggled to get its footing in a world where most Americans are housebound due to the coronavirus pandemic and, well, watching TV exclusively on your phone kind of totally sucks. Not to mention Quibi launched its original programming with Sam Raimi's 50 States of Fright, which had the internet reeling after an episode featured Emmy Award-winner Rachel Brosnahan (The Marvelous Mrs. Maisel) as a woman obsessed with her prosthetic golden arm and diagnosed with “pulmonary gold disease.”

Losing my fucking MIND at this Quibi show where actual Emmy winner Rachel Brosnahan plays a woman obsessed with her golden arm pic.twitter.com/rSfqCv75SG


You can watch the trailer for Reno 911! below.