Detroit artist to begin Malice Green mural after exceeding crowdfunding goal: 'He was a symbol of a piece of justice' 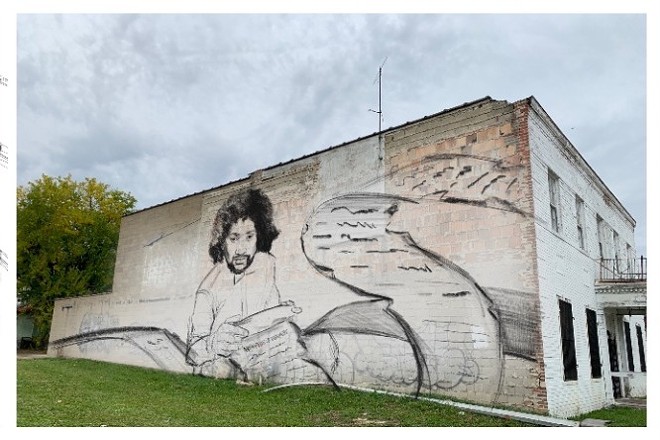 Detroit fine artist Sydney James doesn't know if she's completely ready to take on her latest project — a massive mural to honor Malice Green, the 35-year-old Black man beaten to death by Detroit police in 1992 over a crack rock — but she says she has no choice because the reeling Detroit community is ready for it.

Since launching a GoFundMe campaign to fund the supplies and lift rental needed for the mural on Sunday, James has exceeded her $10,000 goal by $8,000 — and counting. She met the goal within four hours of creating the page, and says any money left over will likely be donated to bailout funds for those arrested during the Black Lives Matter protests.

James says the decision to create a monument to Green came quickly after the news began circulating of the death of George Floyd, the unarmed Black man killed while being arrested by Minneapolis police last month. James read an article drawing parallels between Green and Floyd, which also mentioned Bennie White Jr. Ethiopia Israel's Malice Green mural, painted shortly after Green's death in the area he was killed on Detroit's west side near West Warren Avenue and 23rd. The mural and the building it was painted on was demolished in 2013 after serving as a shrine for the community.

James says at the time she wasn't aware that the mural had been demolished, but she knew the impact it had on the community.

“Even if you were a child, because I was 13 when Malice Green was murdered, it sticks with you — the power of the image, like the black tears streaming from his eyes,” James says. “And that mural was very, very, small, and it used to get vandalized, and yet the community still wanted it, you know what I mean? Against what the community wanted — just like, I feel like everything most of the time — they demolished it. So I really felt in my heart like, on that day after reading that, I was kind of crushed when I read that it was gone.” 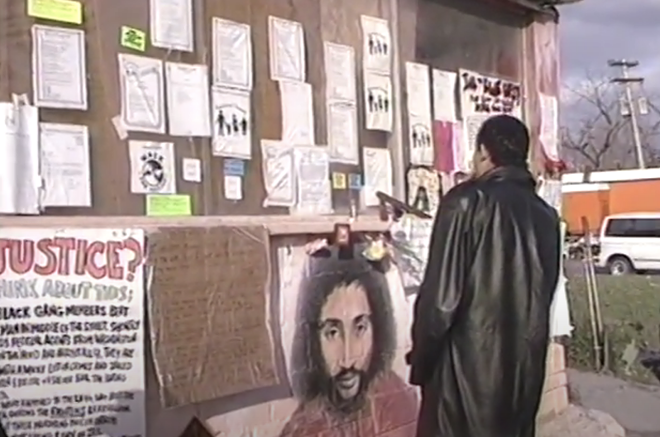 James says she expects the mural will take her and her mentees about a week to complete, which she hopes to have completed in time for Juneteenth, as long as her supplies are shipped in time. To expedite things, the Detroit-based artist and College for Creative Studies alum says she was able to bypass the “political red tape” normally required to create a mural in Detroit.

"The Malice Green Mural Monument" will span the side of the Hamilton-Tucker Gallery on the cusp of Detroit and Highland Park, a space James co-owns with fellow artists Bre'Ann White and Rayshard Tucker.

Though she plans on giving a nod to the original mural, James says hers will look nothing like White's. James' mural will feature Green holding a scroll, which she plans to fill with every Black victim killed as a result of police brutality. The names will start in 1979, the year James was born, and will include those killed this year, like Floyd, Breonna Taylor, and David McAtee, the Black man and beloved chef shot by Louisville police during a Black Lives Matter protest Monday morning. James says she isn't sure where to stop.

“I really don't know how much space I'm leaving for the names, but I don't want this to be an open-ended piece because on one end, you know, on my end, and my purpose is really to really paint this man who became a symbol to tell the people that had died that we haven't forgotten you, but also to say, hey, this shit has to stop,” James says.

“But I don't want it to become like a trophy wall for those who have murdered Black people, you know what I'm saying? So that's a very small fear. But I think the biggest point of the mural is really for all of us to really remember and to be disgusted by it at the same time. I think it will be aesthetically pretty, but really we should be discussing [it] every time we look at it.”

When Green was beaten to death by Officer Larry Nevers and his partner Walter Budzyn, the country was still reeling from the 1991 videotaped beating of Rodney King, who, like Green, was unarmed. Though King was not killed, three of the officers responsible for his beating were acquitted on excessive-force charges, which sparked immediate outrage across the nation and sent Los Angeles into a fury of rioting.

With the Green case, however, there was hope for justice. Both officers Nevers and Budzyn were charged with second-degree murder for the incident, but a retrial resulted in involuntary manslaughter charges. Both were eventually released; Budzyn in 1999 and Nevers in 2001.

“We've been living in this hell ever since,” James says of the years that followed the 2012 death of unarmed Florida teen Trayvon Martin, whose killer, George Zimmerman, was found not guilty of second-degree murder.

“I think people under the age of, probably, 35 don't know or never heard of Malice Green at all. I had to explain to my mentees the case because we had a conviction, and that was really, you know, a part of his importance,” she says. “He was a symbol of a piece of justice. Because of course, it didn't last.”

For the mural, James will have to conduct some extensive research, gathering the names of those who have died by lynching or police brutality. But she says she may have a resource in native Detroiter and quilter April Shipp, who hand-sewed 5,000 names — including those whose names and stories are lesser-known — of every Black person who died by lynching across a 10x10 quilt titled “Strange Fruit,” a project that took years to research and complete.

When it comes to creating "The Malice Green Mural Monument," James is preparing for an emotional experience — which, she says, is sort of the point.

“I don't know if self-care is even a possibility when it comes to making it," she says. "I don't suspect that I'll be having a very good mental-health week while doing it, but having raised the money and having my hype people, and just all the love that I'm receiving around doing it, that's really what's going to keep me strong enough to do it because painting it will be one thing. I think I can get through that process pretty well. But adding the names, I think that's really what's going to be the heaviest portion, you know?

"It's going to be a heavy-ass piece, and I don't even know if I'm really ready, but the people are ready,” she says.