Jobbie Nooner 2020 doesn't give a friggin' heck about coronavirus 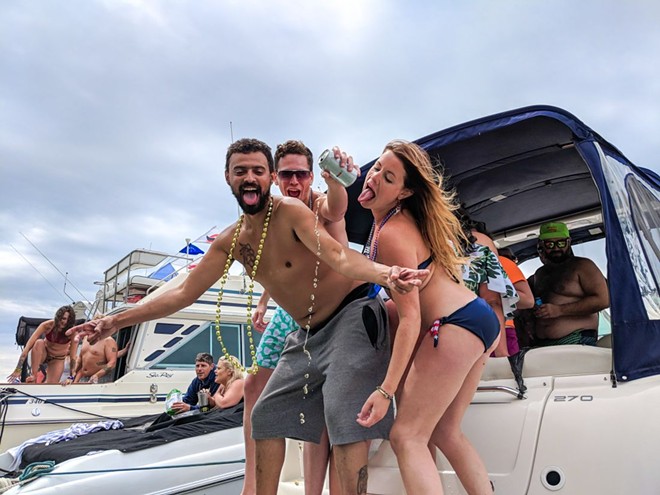 What has boobs, booze, boats, and bros who piss directly into the glistening waters of Lake Saint Clair — and in 2018, blasted Childish Gambino's “This Is America” as if it were a party anthem to smash to?

The answer? Jobbie Nooner, the debaucherous decades-old ritual in which thousands of boaters gather around Gull Island on the third Friday in June to let their freak — and on occasion, Confederate – flags fly, throwing their inhibitions, used tampons, condoms, various Jell-O shot vessels, and cigarette butts into the sea, like gifts to the party gods who somehow have allowed such a disgusting and, to be fair, surprising, event to take place. And take place it will, coronavirus and potential staph infections be damned.

“Jobbie Nooner 2020: What with the Coronavirus pandemic, lockdown, and all is JOBBIE NOONER still going on in 2020???? The short answer is Yes,” a Facebook post made on May 31 reads.

The post was written just one day before Gov. Gretchen Whitmer lifted her months-long stay-at-home order, as well as permitted expanding outdoor gatherings from 10 people to 100. (Whitmer's initial ban on boating during the pandemic became a conservative sticking point, leading to a bizarre Trump tweet about beautiful "boaters.") Jobbie, however, has a history of drawing a lot more than 100 partiers and, as the post suggests, the 2020 iteration is a go for Friday, June 26.

When Metro Times posted to the official Jobbie Facebook page asking whether 2020 party-goers were planning on wearing masks or were going to make an effort to social distance, one commenter says “corona is the least of your worries at that cesspool.” Another said, “sure, if water born aids wasnt a thing.” And one man said he always needs “a shot” after Jobbie and that “some them women need check there product.” Another commenter said he would not be wearing a mask or keeping 6-feet of distance from other boaters. “Not me lol I wanna get close to some BATs ... Big Ass Tiddies!”

OK — so shots of penicillin all around, then? Great.

Anyway, according to local lore, Jobbie Nooner started in 1974 when Modern Engineering employees Lee O'Dell and Lee Wagner gathered 15 of their coworkers and blew off work on a Friday to celebrate Wagner's birthday by taking to the water. In the years since its conception, Jobbie has developed a reputation for being the "Mardi Gras of the Midwest" — attracting up to 10,000 boats and more than 100,000 people around Gull Island.

For this year's event, Coast Guard Senior Chief Steven Ruh told The Detroit Free Press that law enforcement will absolutely be present, despite not knowing just how large this year's crowd will end up being.

According to an Instagram post, neither Jobbie nor Raft Off — Jobbie's sloppy sister — have organizers: “they are self-organizing natural phenomenons.”

We think they mean au naturale.

See you on the other side.