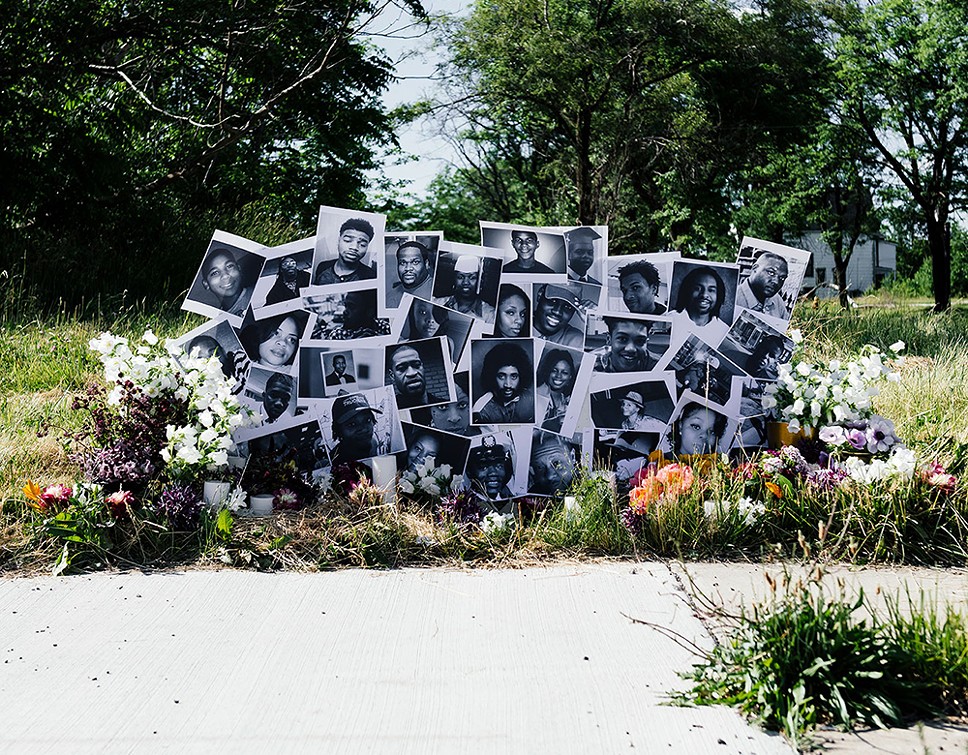 Artist Lisa Waud was trying to figure out how to continue to support local florists who were hit hard when the coronavirus pandemic effectively canceled the busy wedding season when she got the idea to create public art installations — much like she did in 2015 when she converted an abandoned house in Hamtramck into "Flower House."

She started raising money from donations to buy flowers, but when Black Lives Matter protests sparked across the country following the death of George Floyd by Minneapolis police, Waud pivoted her project to highlight different landmarks of significance to Black history in Detroit. This week's project highlights the intersection of West Warren Avenue and 23rd on the west side, where Malice Green was killed by police in 1992. It marks week three of six of her project.

For help coming up with a list of locations, Waud consulted with Andy and Emily Linn, owners of Midtown shops City Bird and Nest, who edited Belle Isle to 8 Mile: An Insider's Guide to Detroit with their brother Rob.

"I like to think that I know my way around, but I just wanted to work with them to like really go deep and show people spots that maybe are a little bit less known," Waud says.

Artist Sydney James recently painted a mural honoring Green on the side of the Hamilton-Tucker Gallery in Highland Park, which depicts Green holding a scroll with the names of other Black people who have been killed.

"I actually drove up to see the mural in progress," Waud says. "So that was hugely influential on my installation — which is just like, I think, the best layering of Detroit artists."

Waud's installation incorporates photos of Black people who were killed by police. "I've been saying, 'come for the flowers, stay for the history,'" she says. "I'm certainly, not thinking that my flowers are the most important thing at these places, but I do think like, maybe if you've heard about these spots before, now is a great time because you're going to see a floral installation, too."

"I know that many folks have been quarantined or working, and we've been under some really unique stresses over the past couple months," Waud says. "I wanted to offer a safe adventure for locals. The installations can be seen from a car, or if you want to put on a mask, you can head in a little bit closer."

Waud says her favorite part of the project has been meeting new people.

"I'm a pretty friendly sight, you know, a lady pulling flowers out of a car and then, like, doing something weird with them," she says. "So I've actually met a lot of neighbors in these spaces, which is really nice."