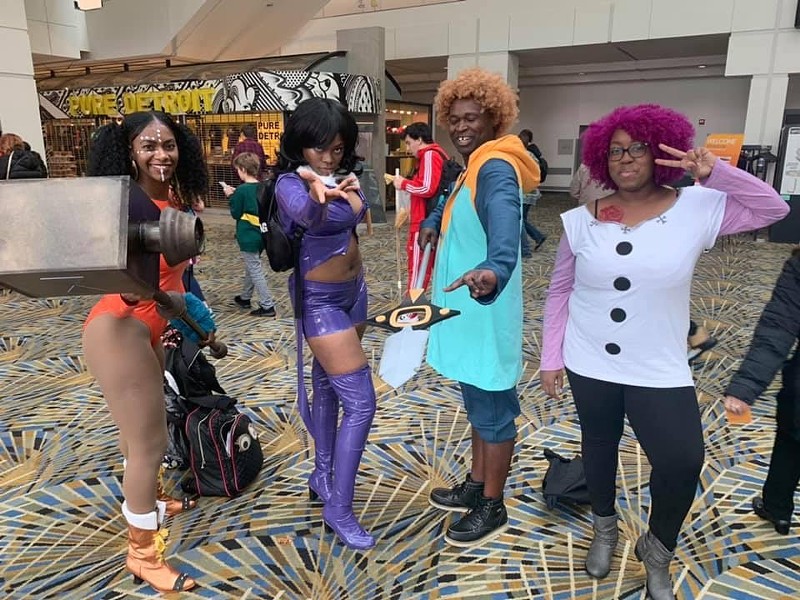 Sure, in 1994 Damon Wayans slipped on some spandex for the superhero comedy Blankman; 1997 found Michael Jai White as demonic assassin Spawn; and Blade followed in 1998, starring Wesley Snipes as a vampire hunter. Then came Halle Berry, who appeared as Ororo Munroe aka Storm in the first film in the X-Men franchise in 2000. There was 2016's Suicide Squad, which envisioned Will Smith as mercenary Deadshot, a decade after Smith starred as aimless and often intoxicated vigilante John Hancock in the movie Hancock.

Jonquil Baker, the founder of CosBlerd_Nation, an inclusive Detroit cosplay community, says things began to ramp up before Black Panther was released and credits director Jordan Peele (Get Out, Us) for igniting a new flame for Black cinema. But it was Black Panther that put Wakanda — and Blackness — on the map as a cultural moment.

“Black Panther catapulted us to this moment where we were like, let's get back into seeing ourselves represented on the big screen,” Baker says. “That was major. It was an energy and a synergy, unlike no other.”

Baker, who grew up in Detroit, says she came into her Blerdness in high school, though she did not do so with peers. She described herself as eccentric and introverted and someone who shamelessly played with Barbies well beyond childhood, and it was through Barbie that she developed her earliest cosplay persona, Barbi313_cosplay.

“I kept to myself a lot, I was very introverted. And I kind of just stumbled upon anime and you know, and just different cartoons and I was like, I fit in this community, but there wasn't a lot of Black girls like myself in the community,” she says. “So I decided to just dive in kind of by myself and just cosplayed whatever I liked, most of the time it was a Barbie.”

She said she started with Dollar Store wigs and homemade costumes and eventually embedded herself into the cosplay world by going to anime conventions like Detroit's Youmacon or Motor City Black Age. Through attending conventions, she realized that there were people that looked like her and liked the same things she liked but also, discovered the ugly side of con-culture: racism and sexism.

“I didn't want to divide us. You know, we're Blerds and represent our Blerdness and we love it. I felt if we blended inclusivity, we could kind of teach and learn off each other and grow and not have so much combativeness,” Baker says. “Cosblerd Nation was the perfect platform for that.”

Baker founded Cosblerd Nation in December 2019 in hopes of uniting the cosplay community. Though Cosblerd Nation emphasizes and represents Blerd nation and Blerdness, the group is open to all ages, races, and gender identities. The group, which hosts events like movie meet-ups, roller-skating parties, themed tea parties, and convention-adjacent outings, is holding its first event since the COVID-19 pandemic struck metro Detroit.

The POC/Cosplayers for Juneteenth Celebration will unite educational games and cosplay at Detroit's Mt. Elliott Park from 2 p.m.-4 p.m. on Friday, June 19 to honor the day in which the last enslaved African Americans were emancipated from the south. The event is free and open to the public and invites people to cosplay as their favorite POC anime, manga, or comic book character or other pop culture figures, though Black pride garb is also welcomed.

The Juneteenth celebration will offer refreshments and games, like Black history bingo, as well as casual discussions about freedom, the Black Lives Matter movement, and beloved Black characters in comics and anime.

“Oh my goodness, we've been fiending for some cosplay,” Baker says.

With the state of current events and the multiple crises overlapping one another — the world seems to be spinning faster than normal, a phenomenon that a Marvel comics storyline might attribute to some evil intergalactic warlord — Baker says that “playing” is more important than ever.

“I feel that it keeps your innocence,” she says. “I think that's important. I really do. Children are, you know, their, their minds are so pure and they love on anyone, you know, hate is only taught. When you hang on to your innocence, it shows that you're open-minded to a lot more.”

One of the characters Baker has played is that of Wonder Woman. Baker, who gushes over Gal Gadot's 2017 portrayal of the lassoing princess-turned-warrior, went viral when she posted a selfie dressed as Wonder Woman. Baker had dressed up to attend a 4 p.m. screening of the movie. She says she didn't come home until 4 a.m. because so many people had stopped her to ask for photos that she basically toured the metro Detroit area taking photos and meeting with people.

“I had no idea it would be that big. I had the tall white boots on and my feet was hurting, but I didn't care. I loved it,” she says.

But the most satisfying part of her viral cosplay came after the fact when a friend reached out to her about her Wonder Woman costume and how it had impacted his children.

“I had a friend, he's married to a white woman and he has two mixed daughters,” she says. “He told me that of his two daughters, one hated the texture of her hair. And when she saw me cosplay as Wonder Woman, she started to grow into loving her hair. Now, she loves cosplaying as Wonder Woman she is feeling better about her hair. And that's really important to have that representation, so little Black girls can see themselves as any character.”