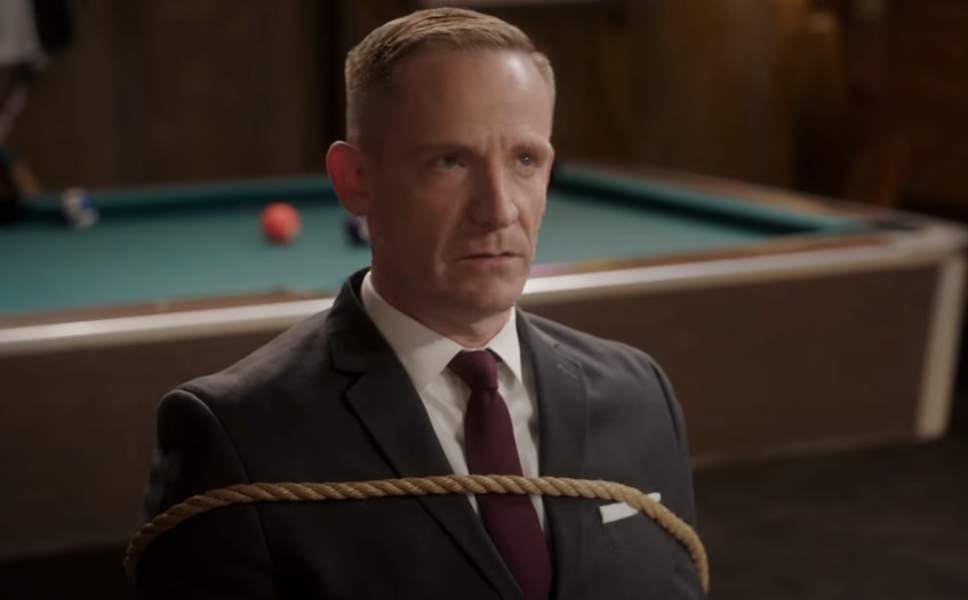 This one word describes comedian, actor, distinguished gentleman, and lover of malapropisms Marc Evan Jackson’s perception of the current state of, well, everything.

Jackson, who stars on Brooklyn 99 and The Good Place, is quarantined in Venice, California, with his wife and three cats, and is only slightly disappointed at just how little he’s accomplished in his downtime, which has largely consisted of using words like “bananapants,” as well as some organizing and project planning.

“I expected that I would know Mandarin by now or that I'd be a gifted woodworker or something,” he says. “A friend of mine tweeted the other day that she finally tackled a project that she's been procrastinating on since February. And it took five minutes. Why do we do this to ourselves? Why do we put off these things? I will tell you that improvisational skills have helped during this time to use what's in front of you and to adapt to circumstance and to work with what you have and to not fear change. It's definitely a legitimate mental health pathway and a completely valid and wonderful side effect of improvising.”

For Jackson, he’s been leaning into the fundamental belief that comedy itself is “finding some joy in absurdity” and this weekend, Jackson will help bring some of the joy and absurdity to our living rooms via Detroit Improv Weekend, which kicks off on Saturday, Aug. 8 with a virtual stage performance by Hamtramck High School's improv troupe, as well as those from The Improv Project and alums of Second City and Planet Ant.

Jackson will also take to the screen himself t0 perform with longtime collaborator and mustachioed improviser Paul F. Tompkins for a live virtual incarnation of their touring show, “Mr. Jackson & Mr. Tompkins: A Two Gentleman Improv Show” on Sunday, Aug. 9. Proceeds from both performances will benefit the improv youth program as part of The Detroit Creativity Project, the nonprofit founded by Jackson and his wife, Beth Hagenlocker in 2011.

One of the things we love most about improv is that it teaches us how important it is to listen to others, to work hard at seeing the world from their perspective, and to build on that understanding. That's empathy. And the ability to cultivate empathy gives us hope. pic.twitter.com/rkG04EjrDW


Originally from Buffalo, New York, Jackson, 49, moved to Michigan for college when he was 18, where he bounced between Grand Rapids and Traverse City before landing in what is now Midtown, Detroit. “I lived in Detroit for four years or whatever and in that time it became my forever home,” Jackson says. From 1997 to 2001, he embedded himself in Detroit’s vibrant comedy scene fostered in part by the city’s since-shuttered Second City where the careers of now-familiar comedy forces Keegan-Michael Key, Maribeth Monroe, Sam Richardson, Jamie Moyer, and Tim Robinson were launched.

“We often get asked a lot of us what was in the drinking water in Detroit during that time,” Jackson says. “The Second City in Chicago and Toronto in the late '90s were cities that people went to on purpose. They went there for tourism. For Detroit, that was not the case. I mean, the casinos were just coming up, but even so, like, nobody went to Detroit on purpose.”

He explains that because Detroit was not exactly what one would consider a vacation destination, that the revues he and his Second City cohorts would write, perform, and open had a dismal eight-week shelf-life. They could tell that audiences would peter out because everyone who wanted to see the show locally already had, whereas the revues in other cities could run for a full year, with full audiences. For the Detroit players, Jackson said they had to learn to pivot and write three or four shows a year, in addition to other theatrical programming, to maintain a steady audience. This creative workload also allowed them to hone their craft in ways they may not have otherwise been able to do.

“It bred a brand of fearlessness and scrappiness and limitlessness. You realize that when you think you're out of ideas, you're like 40% there. You can still go, there are still things,” he says. “And when you find yourself saying a lot of ‘yes’ in life and taking other people's ideas and running with them and not finding impediments and excuses and you work together, like, anything is possible. And that's where all of us came from. We were steeping in this Coney water of goodness.”

Goodness is absolutely a word one could associate with Jackson, if for no other reason than he has dedicated a part of himself to bring the gifts of improv to Detroit's youth as a means to develop life skills, self-esteem, and the very fearlessness he and his comedy pals were granted permission to explore back in the Second City days.

In 2011, as part of then-Detroit Mayor Dave Bing's city initiative aimed at bringing Detroit back from near death, Jackson and his wife, as well as a handful of fellow creatives, decided to jump in feet first with The Detroit Creativity Project, a theater program aimed at the city's youth.

“Detroit, as I say, had such a foundational force in all of our lives and was the root of all of our successes that my wife and I had people over for a couple of dinner parties, with a lot of Detroit ex-pats and we had all these people over and we were like, what should we be doing to give back to Detroit?” Jackson recalls.

“Within seconds it was like, well, let's see the common denominator for all of us is that we learned this great life skill of improvisation,” he says. “And it taught to say yes, and to venture into the unknown and to fail boldly, and that failure is not a lasting condition that it's not fatal. And when you're willing to look silly and willing to fail, you almost never do you. It's when you try to stay all buttoned up and Niles Crane-like, that's when you're vulnerable because you're afraid not to have the answer.”

The Detroit Creativity Project started out as a 10-week weekend elective but was originally pitched as an after-school program. But organizers, including Jackson, quickly realized that Detroit students had real-world responsibilities that kept them from regularly attending. In 2013, the program became formally integrated into school's in-class learning. And in the last few years, The Detroit Creativity Project has taught improv to more than 1,000 students each year.

Jackson says the organization even teamed up with the University of Michigan for a three-year study that found that after a 10-week, one-hour per week in-school improv program, students self-identified a 40% reduction in social phobias, social anxiety, and depression, as well as revealed improvement in test scores and attendance.

“It's just such an empowering confidence-building, an empathy-driving skill that truly teaches you that you are already equipped with everything you need to go about life. You're improvising in every moment. Improv is impossible on its face,” Jackson says.

“There's no script,” he says. “You have no props or costumes. You've got a couple of bentwood chairs and a bunch of people. You should not be able to create vivid locations and relationships and characters. It shouldn't work. But when you spend the emotional capital of going like, yes, I'm on board, let's do this, it's truly astounding what can be accomplished.”

The Improv Project presents An Evening of Improvised Comedy takes place on Saturday, Aug. 8 at 8 p.m.; tickets are a minimum $5 donation and can be purchased here. "Mr. Jackson & Mr. Tompkins: A Two Gentleman Improv Show" will take place on Sunday, Aug. 9 at 7 p.m.; tickets are $7-$10 and can be purchased here. Proceeds benefit The Detroit Creativity Project and The Improv Project's youth programming.