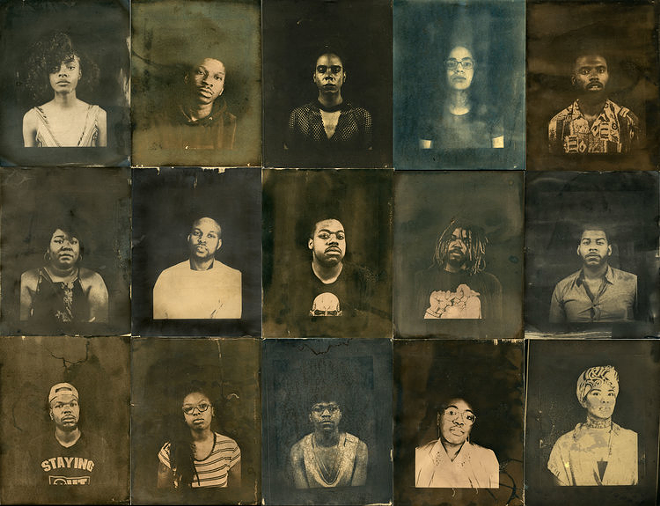 One time, while partying in the dorms at Wayne State University, photographer Darryl DeAngelo Terrell's friend started crying when rapper Kendrick Lamar's "Chapter Six" came on: "Pray that we make it to twenty-one, one, one, one..."

"I'm sitting here, like, what the fuck are you crying about?" Terrell says. "And he goes into saying how he never thought he'd make it to 21, and his birthday was in a week."

Another time, Terrell was thinking about how on "We Don't Care," Kanye West utilizes a children's choir to chilling effect: "We weren't supposed to make it past 25/ joke's on you we're still alive..."

Later, while attending grad school at the Art Institute of Chicago, Terell came up with an idea for a new project: to photograph 200 Black, Latino, and Indigenous people who are in their 20s.

Terrell started the project in the summer of 2017 in a predominantly Latino and African-American community in Chicago called Pilsen.

"I realized that it was heavily fighting gentrification," Terrell says. "It was interesting to me because being from Detroit, being from the East side and then going to undergrad at Wayne State, I feel like my experience with gentrification is vastly different from what I was experiencing when I was in Chicago. In my eyes, gentrification (in Detroit) is the way how they close down all the schools, making it so there's only two or three high schools on the West side, making it harder for people to really exist, making it more of a barrier for people to get quality education. And to me that's the form gentrification because if I have children and all the schools in my community are shut down, I have to move for my children to be able to go to school. But in Chicago, it was a bit more cut and dry — developers are coming in, buying up space, raising up the property taxes, raising up the rent, and people were forced to move out."

While in art school, Terrell was also thinking about how enjoying the arts was a privilege often not afforded to people of color. (A recent study from Knight Foundation and the Urban Institute found that Black Detroiters report less access to arts and culture amenities than white residents.) "Museums close at what, 5 or 6 p.m.? For working class people, most of us get off work between 5 and 6," Terrell says. "So we don't get the leisure or the access and opportunity to go to a lot of art spaces, unless they're like the DIA or MOCAD where they have one specific day where they're open until 9 or 10 p.m. at night."

Terrell envisions exhibiting the completed portraits in an art gallery in a gentrified community, where "every face, every person that they've displaced who was between the ages of 19 and 30 is tiled on all four walls in a room, and no one's greeting you with a welcoming gaze, everyone has a very strong, confrontational gaze."

So far, Terrell has photographed 121 portraits. The photos are taken digitally, and then printed on a transparent sheet, which is placed over a sheet of fine art paper coated in cyanotype. The cyanotype reacts to sunlight, forming a dark blue image. Terrell then soaks that print in black coffee, giving the work a gritty feel.

"I get these different tones of brown, which I really enjoy because none of the images are identical," Terrell says. "Every image has an individual identity, similar to each individual person that I photograph."

Tomorrow I will be taking more photos for my largest project to date #Project20s I have photographed over 121 people fo it in the past 3 years Looking for 19-30 yo Black, Latinx, and Indigenous ppl in Detroit MI, to be apart of it