Detroit's controversial 'Illuminated Mural' has been 'irreparably damaged,' will be replaced by new mural 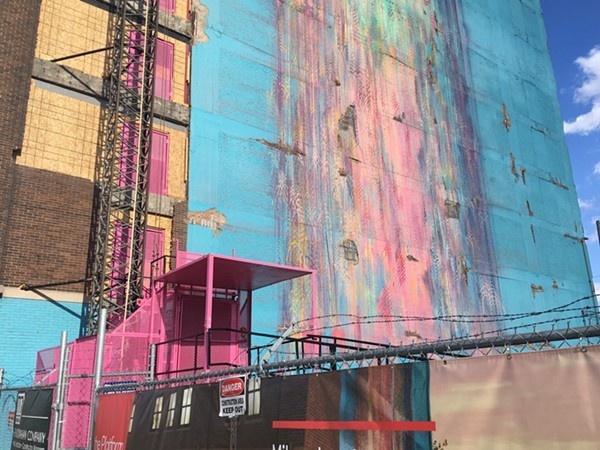 It's the end of an era for a colorful yet polarizing mural that has been called both "drop-dead gorgeous" by the Detroit Free Press and "just paint slid down the side of a building" by at least one unimpressed churchgoing neighbor. Art, after all, can be subjective.

But what isn't open to artistic interpretation is the fact that that "Illuminated Mural," the mural painted by artist Katie Craig about a decade ago near Detroit's New Center area, has been "irreparably damaged." That's according to Dan Austin, the publicist for the forthcoming Chroma co-working space and food hall at 2937 E. Grand Blvd.

The mural has been the center of much controversy in recent years. In 2016, Craig filed a lawsuit to protect the mural when the building ownership switched hands, citing the Visual Artists Rights Act, a 1990 law that expanded federal copyright to protect artwork of "recognized stature." In 2017, a settlement was reached after the building was sold to developer group the Platform, who pledged to keep the mural, incorporating it as part of the architectural renderings for its Chroma project.

Last year, the mural was damaged during Chroma construction, but Austin said that developers The Platform were working with Craig to restore the mural. Unfortunately for "Illuminated Mural," that plan fell apart.

"The plan, as we told you a while back, was always to save the mural, but it just became unfeasible to do so after it became clear just how much renovation work was necessary on that wall in order to save the building," Austin tells Metro Times. "When the old mural sadly became irreparably damaged, we worked with (Craig) to arrive at an agreement."

In its place, a new mural has been commissioned by Detroit artist Sydney James, who recently created a mural in honor of Malice Green, the Detroit man who was slain by cops in the '90s. James's proposed mural is a Motor City take on Johannes Vermeer's famous "Girl with a Pearl Earring," depicting a woman with a bright pink Detroit "D" earring instead.

You can see a rendering of the new mural below. Work on the project is expected to begin on Sept. 1.