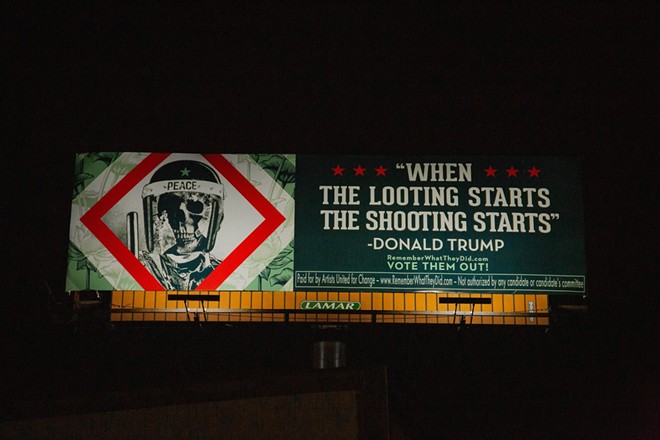 Not all Detroit-area billboards are looking to sell you injury lawyers, jewelry, and pro-life damnation. In fact, a new billboard campaign is using powerful imagery and real quotes straight from the mouths of the country's top deplorables — President Donald Trump and his lackeys — to energize voter turnout in key battleground states.

The #RememberWhatTheyDid and #VoteThemOut campaigns have recruited renowned artists to create stirring works for billboards and street-level wheatpaste posters to encourage people to vote Trump out of office in November.

The campaign is organized by Robin Bell, known for his politically charged video projections on the Trump Hotel in Washington, D.C., and Scott Goodstein, who led alternative media campaigns for Barack Obama and Bernie Sanders. For the campaign, the team turned to artists like Nekisha Durrett, Nate Lewis, Rafael Lopez, Robert Russell, Rob Sheridan, Swoon (Caledonia Curry), and Los Angeles-based friend of Detroit Shepard Fairey. The campaign has partnered with Voices of Michigan and now has billboards posted throughout the country, including in Detroit neighborhoods.

I’m proud to be a part of #RememberWhatTheyDid and the #VoteThemOut campaign, created and organized by Robin Bell and Scott Goodstein. Go to: https://t.co/wBxFmd5km0 to learn more about it. Thanks for caring! -S pic.twitter.com/2oclwdksPe


The billboards and posters each display a vile quote from either Trump or someone in his inner circle, spanning racism, hate speech, immigration, and the COVID-19 pandemic. One billboard reminds viewers that Senator Lindsey Graham said he “didn't care” if migrants remained in cages for “400 days.”

Many of the billboards target Trump's failed leadership and dangerous rhetoric. Fairey's contribution utilized Trump's quote following the Black Lives Matter protests in the wake of the death of George Floyd, a Black Minneapolis man who was killed by police in May over a counterfeit $20 bill.

“These THUGS are dishonoring the memory of George Floyd, and I won’t let that happen,” Trump tweeted. “Just spoke to Governor Tim Walz and told him that the Military is with him all the way. Any difficulty and we will assume control but, when the looting starts, the shooting starts. Thank you!”

Twitter flagged the tweet for glorifying violence. The phrase "when the looting starts, the shooting starts" dates back to Miami's former police chief, who warned of civil unrest in Black communities in 1967.

Fairey, who was commissioned in 2015 to create a massive mural on the side of the One Campus Martius building downtown Detroit (and who famously created the iconic Obama “Hope” poster in 2008), said his billboard design is a reminder that Trump encouraged police brutality against protesters who were protesting police brutality.

Free posters featuring the artwork are being offered for distribution by Third Man Records in Cass Corridor and at El Club in Southwest Detroit.

To learn more or to register to vote, visit RememberWhatTheyDid.com.

A post shared by TMR Cass Corridor (@thirdmanrecordscasscorridor) on Aug 28, 2020 at 9:09am PDT