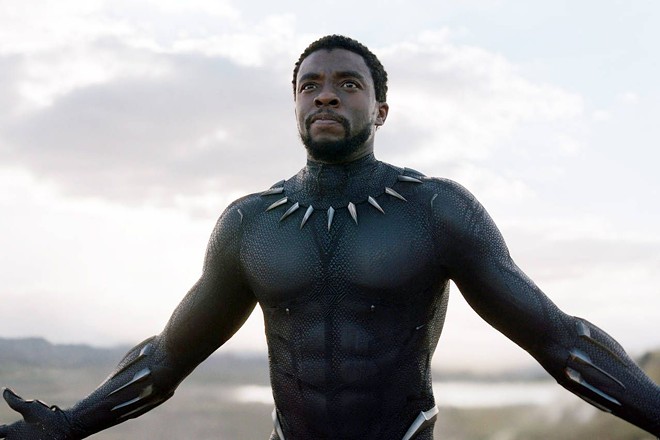 Chadwick Boseman’s legacy is that he was able to show the world who Black people really are through his art. He was a one-man Harlem Renaissance. Boseman had the gift of bringing to life Black history icons that had been forgotten, intentionally hidden, or intentionally dismissed.

When I saw 42, even though it wasn’t about my grandfather, National Baseball Hall of Famer Norman “Turkey” Stearnes, for the first time in a mainstream film, I was able to visually see what it might have looked like for a Negro Leaguer to take the field in Birmingham, Alabama. That was my favorite scene in the entire film, and I remember tears streaming down my face because I had never seen footage of my grandfather — and I never will. Due to the color of his skin, it’s simply not an option.

The baseball heavyweights of his day like Babe Ruth, Lou Gehrig, and Ty Cobb have footage of their playing days that anyone can pull up, simply because they were white. Chadwick Boseman used his imagination to leap over the devastating impact of Jim Crow and provide us with the gift of visualizing Black excellence that had been previously suppressed.

When I saw Marshall, I was given a history lesson that school never provided. Feeling cheated and disrespected by the institution of education, I felt his performance in the film provided an illumination of a civil rights icon who should hold a firm place in American history. As of today, I only know of one other person who has actually seen the film.

When I saw Get on Up, Boseman provided the backdrop story for how the artists I loved (mainly Prince and Michael Jackson) were influenced by the soulful spirit of James Brown’s music. The film introduced me to the Godfather of Soul by displaying the full humanity of an artist who was both a master of his craft and a man grappling with racism, fame, and addiction. Again, it was a vital history lesson about someone who added value to American culture and history through the lens of both music and activism.

The arrival of Black Panther in 2018 was a celebration of our ancestors, our history, our culture, our dreams, and our potential. Showing the full complexities and the many layers of what it means to be Black, literally every word, costume, sound, and visual was a testament to the power of representation and true liberation. Under normal circumstances, to see a movie nine times in a theater is beyond ridiculous. Living in this world as a Black woman, seeing Black Panther nine times in a theater was an honor. Unfortunately, most people labeled it a superhero flick and didn’t bother to unpack the deep commentary that elevated the film’s many messages about America’s relationship with Black people, the history of colonization, and the need for Wakanda’s hidden utopia as a safe space.

Instead of being objectified or shown as mules of the world, the four leading women of Wakanda were all unique displays of strength, power, intellect, beauty, and grace (something that has never been shown in mainstream films). Watching the film wasn’t enough for me; I wanted to carry the spirit of the Black Panther with me in my daily life as a foundational focus. This led to our basement being dubbed “Wakanda” and the acquiring of other collectibles and costumes, etc., along the way. In fact, I remember buying matching shirts for my wife and myself before the film was even released (so that we could wear them to the show). Without even having seen the film, I knew it would be special because of the cast, but I never would’ve guessed it would be the product of the collective dreams of our ancestors.

Chadwick Boseman was extraordinary, special, and exceptional long before we came to know he had cancer, but people barely noticed his work. His legacy was not that he was able to endure and persevere to create such an incredible body of work (that fact is simply another unbelievable and undeniable testament to his essence). His legacy was that he shared his gift with the world, he educated us in ways we were never taught before, he told stories with integrity, and he was born to be our king. It breaks my heart that he would be ripped away from us during this time and also that people will only now be inclined to watch his films because of his shocking death.

In the most brutal scene of Black Panther, Killmonger throws T’Challa over the waterfall and claims the throne as his own, leaving mainly the women of Wakanda tasked with restoring order until T’Challa returns from the ancestral plane. Unlike the film, I know in this moment our king is not returning, and that’s probably why I spent much of the weekend crying. It will be up to us all to do what we have never done. It’s essential that we join forces to seek elevation and repair the harm done by centuries of ignorance, fear, and hatred. In order to truly be free, in the words of King T’Challa, we must all proceed with the mindset “I must right this wrong.”

Vanessa Ivy Rose is the granddaughter of Baseball Hall of Famer Norman “Turkey” Stearnes. Standing upon his shoulders, she is an educator, activist, basketball coach, creative, and storyteller.