Jova Lynne on her return as MOCAD's senior curator: 'I believe in Detroit' 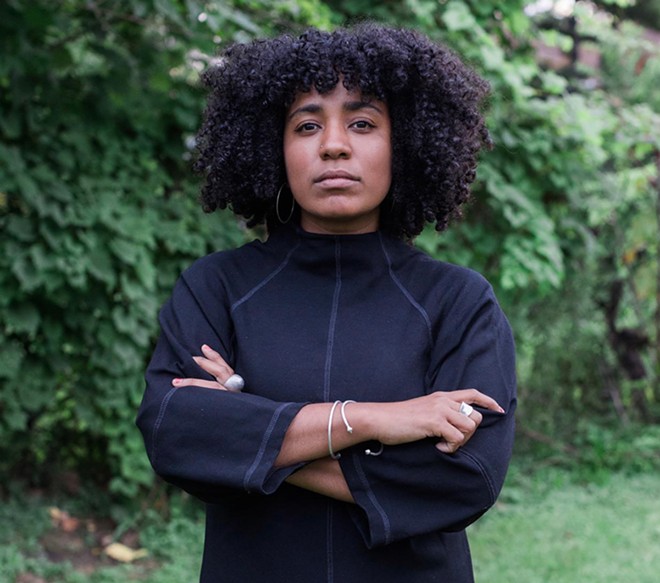 It's been a whirlwind year for Jova Lynne, who parted ways with the Museum of Contemporary Art Detroit in April — and now, as of earlier this month, has returned as its senior curator.

"It feels right," Lynne tells Metro Times. "I wouldn't have returned if I didn't feel listened to."

In July, Lynne joined "MOCAD Resistance," several dozen past and current museum employees who co-signed a letter calling for the ouster of executive director Elysia Borowy-Reeder over toxic workplace allegations, including "racist micro-aggressions, mis-gendering, violent verbal outbursts, misrepresentation of community partnerships, and the tokenization of marginalized artists, teen council members, and staff." After an investigation, MOCAD fired Borowy-Reeder in July.

Ousted MOCAD director hired one of Detroit's most prominent Black lawyers, accuses museum of violating her civil rights
By Lee DeVito
The Scene
Lynne was one of three Black curators to leave the museum in recent years. But despite the turmoil, Lynne says MOCAD always had a special place in her heart. "MOCAD was one of the first places I visited when I visited Detroit in 2010," says Lynne, who comes by way of New York. "I care about the city, I care about the art world, and what I know of the art world is it is so rooted in this city."

Lynne first joined MOCAD as part of a curatorial fellowship in 2017, where she organized a sprawling retrospective of perhaps one of Detroit's most misunderstood artists — Heidelberg Project mastermind Tyree Guyton — which opened in 2018. She was appointed as the museum's Susanne Feld Hilberry Curator in 2019, a senior role named after the late Detroit art maven.

Lynne says she wants to lead the museum's curatorial department with a focus on Detroit art. "Detroit is already a cultural leader," she says. "We don't need to prove ourselves — we just need to provide for ourselves and each other."

After departing MOCAD, Lynne and another former curator at the museum, Tizziana Baldenebro, kept busy by curating an online exhibition highlighting the art of workers in Detroit's arts community. "I think as the art world gets itself closer and closer to creating change, it's [asking] how do we acknowledge the totality of what an artist is, or what an artist can be?" Lynne says. "How do we acknowledge those people who create, who make art happen for others, and really look at them for who their artists selves are? And I think not only was I wanting to continue curating, but it was also about highlighting labor. The artist as a laborer is very integrated into the art world here in Detroit, and so that made it more exceptional for me." (Lynne says she hopes to make it an annual exhibition. Baldenebro also landed on her feet, being named executive director of Cleveland's SPACES last month.)

Lynne says MOCAD's board approached her this summer about the possibility of returning to the museum. While her tumultuous experience of working in an art museum may not be unique, "I think this outcome is unique," she says. "In the art world in general, there's a lot that's coming to light about museum practices. And I think the outcome of this, where the board is really listening and really trying to work with the community and with staff to sort of regroup and make amends, is pretty amazing."

As the museum's senior curator, Lynne will oversee the museum's curatorial department, as well as education and public programs. For her next exhibition, slated to open in February, she's aiming to once again highlight the Motor City, helping to organize a show of 42 Detroit artists.

Lynne says other future exhibitions at MOCAD include a 25th anniversary retrospective of Steve Hughes' long-running zine Stupor and an exhibition of the work of the Israeli artist Tali Keren. Due to the coronavirus pandemic, Lynne says there are no events scheduled at the museum for the foreseeable future, but says she hopes to offer some online or virtual programming. The museum is open for visitors.

Despite the challenges of the pandemic, "I feel like this is an opportunity to see my curatorial vision come to life at MOCAD," she says.

In the meantime, the museum is still searching for a new executive director. MOCAD Resistance has called for a national search, with an emphasis on BIPOC candidates — Black, Indigenous, and people of color — "who will work for the city in which it stands," according to the letter they sent to the museum's board.

"I think I want to really look at MOCAD's original foundation," Lynne says. "And I think a part of it was to be a site that was for the community, where folks could engage with the big issues and questions and ideas of our time."

For Lynne, community is key.

"I think it really needs to be noted that this was the work of the community. It was several hundred voices coming forward," she says. "I'm back because of the community. I believe in Detroit, and I believe Detroit demanded what it wanted and needed, and that the MOCAD board listened. The community made this happen, and I will do my best to hold myself accountable to this amazing community."

Dozens of employees at MOCAD and the DIA demand the ousters of their executive directors
By Lee DeVito
Local News
We have a new events newsletter! Find out the best things to do in the area every Thursday in your inbox.