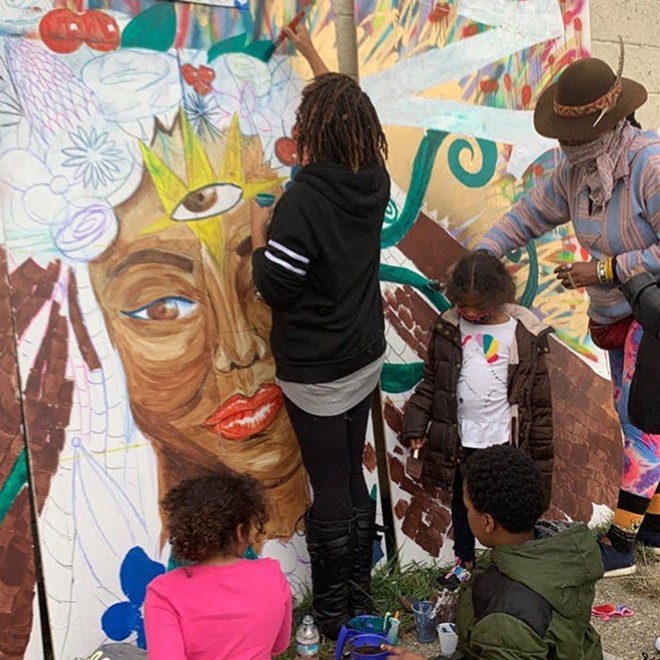 Konstance Patton, a visual artist now based in New York, returned to Detroit a year and a half ago for a friend after being away for more than a decade. One night she attended an artist event in Detroit and met Corderio Johnson, a local actor and director who stopped to take Patton’s picture, noticing her “I am Possible” ring. After exchanging social media handles, the two realized they shared a connection.

Johnson told Patton that evening that he needed to get out of the house for a personal reason, and was shocked to discover Patton was in town for the same reason: the funeral of his writing partner, poet and producer Dana Selah Elam.

Patton immediately invited Johnson to heal at her family home for a few days in Royal Oak Township, where she and Elam grew up. Johnson remembers making food, playing music, even attending a Wu-Tang concert with Patton. The two talked about so many different things on that day, and shared stories about art and writing. Johnson says, “it was a vibe, very organic,” shifting his tear-filled eyes to the ceiling.

“That’s just Dana, connecting me to someone else I should know.” Johnson points his finger to the sky. “Even up there, you still working.”

Dana Elam created Black girl magic throughout her life, uniting souls in creativity. While alive, Elam took the best of her surroundings and turned a vivid imagination into waking dreams. As the owner of The Selah Experiment, an indie film production group, she shared her words through poetry and script writing.

Recognized by many as a talent on the rise, Elam’s last project she worked on with Johnson would have been her first fully written feature film, The Goddess Network. (Johnson was able to complete his first full length project, Where To, a romantic comedy to be released on Amazon Prime early next year. Were she still alive, Johnson says Elam would have worked on it with him.)

Patton found a way to memorialize her friend through a mural workshop she developed called the “Honor Project,” which she created as a way to pay homage to the people she cared about offering a way to heal through art. She calls the tribute she illustrated for Elam “Saint Selah, Patron Goddess of Art, in the Land of Royal Oak Township,” which will be permanently installed at the Boll Family YMCA in downtown Detroit in spring of 2021, a place that was significant to Elam.

Patton, who is now head artist of the Soho Renaissance Project in New York, grew up with Elam all her life. Patton said that Elam was always writing, making art the whole time, actively engaging imagination. “She used to have us lay down on the ground outside and guide us through a meditation, she did it all the time,” Patton says, “She didn’t know the power she had, Dana had us going into ourselves and exploring our inner world.”

Hiram Harris, director of Parks and Recreation at Royal Oak Township, says Elam the artists have come a long way, and given back to their roots. “Two young ladies who are prominent artist living in New York think enough of the neighborhood they were raised in to come back home and do a project to involve local citizens and host the project at the center they grew up in,” Harris says. “That’s definitely healing.”

Elam’s sisters Taren Wynn and Shwana Davis say Dana was a shy child. The sisters both believed their grandmother’s gift of poetry was passed down to her.

“To see Dana blossom into this person that chased after her dreams and anything else she wanted to do” Wynn says. “I’m just a proud big sister.”

As humans, grief and trauma and the expression of these emotions is an individual process and journey. Traditional ways of finding peace and enlightenment through troubling times continue to expand in new areas, including alternative forms of therapy such as energy work, meditation, and other esoteric ways to heal the soul. 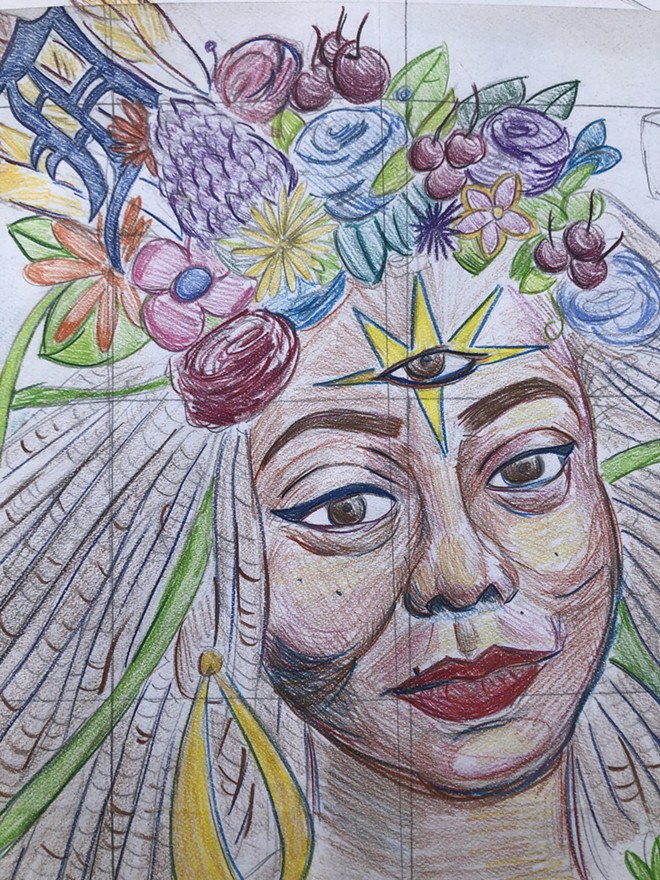 Achebe says the act of painting, when used for therapy, allows you to be present with just one thing. Another element in the healing process Achebe identified is connecting to a community that allows you to be your full self, to be held, seen, and validated.

“Grief is a process,” Achebe says. “Having a vision of who you are, outside of the grief is essential.”

Patton has trust in her art, in the universe, and in God, and knows doing a wonderful act for this beautiful woman in her hometown will continue to receive the support needed, to move the “Honor Project” along.

“None of these people’s work should be forgotten, we have to continue to honor each other,” Patton said. “Dana’s name will resound through time with this mural.” Patton pauses, then says, “I just hope her family likes it.”