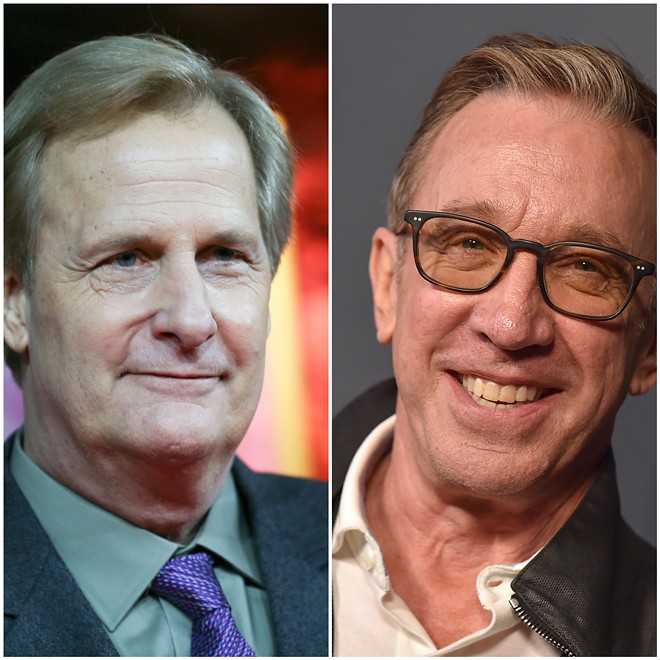 One is an esteemed and award-winning actor and musician who, yes, famously starred in a movie where his dimwitted character had an explosive fecal emergency while wearing a bolo tie; the other, the voice of beloved children's space toy Buzz Lightyear in Pixar's Toy Story franchise, and who, as a white dude, has complained about not being able to use the n-word and once compared being a conservative in Hollywood to living in 1930s Germany.

Where native Michiganders Jeff Daniels and Tim Allen come together, er, sort of, is in lending their voices to political ads — though, of course, for opposing parties and candidates.

In an upbeat 30-second ad titled “Together” that aired on YouTube Tuesday and is slated to begin airing on local television Wednesday, Allen lends his "Pure Michigan" voice in support of Republican U.S. Senate candidate John James.

“Michigan, a place where people respect each other, love each other,” Allen says. “Michigan — that's John James, defending our country, offering a healing hand, creating jobs that matter.”

Michigan: our values, our people, our home. That’s what I’m running to protect. We take care of each other & it's time for a leader who will take care of us & put people before politics. We are blessed to live in the greatest state in this nation.


This isn't the first time the Home Improvement star — who also attended President Donald Trump's 2017 inauguration and once starred in a regrettable Native American stereotype-laced children's comedy Jungle 2 Jungle — has lent his support to a presidential candidate. In 2016, he was in favor of former Ohio governor John Kasich, who, as the Detroit Free Press notes, has endorsed Biden this year.

“Politically I’m kind of an anarchist if you see my stand-up,” Allen told Entertainment Weekly in 2018. “I’m for responsible government that actually does what we pay them to do, I’ve worked different jobs, and I’ve had a colorful past, and I pay a lot in taxes. I wish we got more for our money.”

Daniels, an outspoken critic of Trump — just listen to his recent folk song “Trumpty Dumpty Blues,” which drags the president's coronavirus response — takes a more solemn approach for his two-plus minute pro-Biden #AmericaNeedsMichigan ad. The spot was produced by Don Winslow Films and focuses on “Midwestern values” and the struggle of blue-collar workers and various industries suffering under Trump's America.

Using footage of farmers, empty sports arenas, factory workers, food assistance lines, and shocking images of body-bags piling up at a Detroit hospital during the beginning of the coronavirus crisis, Daniels takes aim at Trump, never by name, but by his laundry list of misdeeds.

The video spot also features footage of Biden receiving the Medal of Freedom from President Barack Obama, comforting children, and honoring U.S. servicemen and women while wearing a face mask.

“I'm Jeff Daniels. I grew up in Michigan. Lived here most of my life. Still do,” he says. “I voted for Joe Biden.”