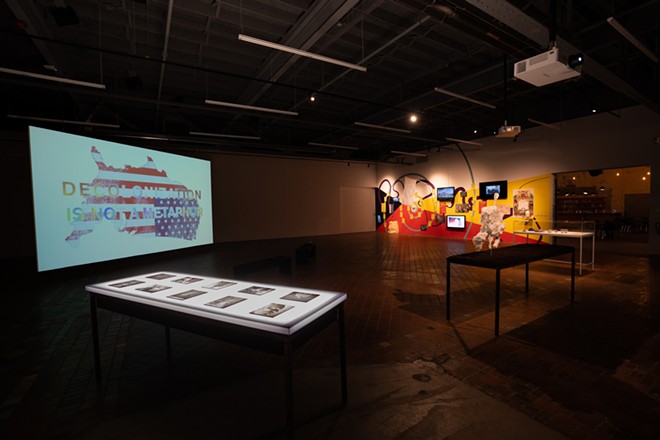 Detroit contemporary art gallery MOCAD has been undergoing a public reckoning with institutional racism after dozens of employees alleged a toxic workplace under its previous executive director, including "racist micro-aggressions."

While the reckoning was led by current and former MOCAD employees, New Red Order also played a major role in facilitating this change at the museum.

A "public secret society" facilitated by Indigenous artists — including brothers Zack and Adam Khalil, who are Ojibway and grew up in Sault St. Marie, and Jackson Polys, who is Tlingit from Alaska — New Red Order postponed its first solo exhibition at MOCAD, Crimes Against Reality, in July as a show of solidarity with the employees. The exhibition, which includes video installations, finally opened last month.

On Friday, MOCAD will screen New Red Order's Never Settle online, and Zack Khalil and Polys will also participate in a virtual discussion along with Detroit artists Sacramento Knoxx and Halima Afi Cassells. Senior curator Jova Lynne, who rejoined the museum earlier this year, will introduce the program.

Never Settle is a sort of recruitment video for New Red Order. "This promotional initiation video lures inductees with promises of decolonization and settler remediation," is how MOCAD describes the film. "Imagery of settler-led planetary destruction is juxtaposed with sequences of underground group therapy sessions where settlers can lose, forget, and explore their identities in order to indigenize."

The program starts at 6 p.m., and the discussion starts at 7 p.m. More information is available here.

The New Red Order exhibition moved ahead after MOCAD's board "[agreed] to take action to dismantle the ongoing effects of settler colonialism and to serve Detroit's Indigenous communities, as well as implement substantial changes in museum staffing, board, and labor practices brought forward by former MOCAD employees and current staff," according to the museum.

"The work of NRO and this exhibition has been instrumental in setting forth institutional change," MOCAD said in a statement. "MOCAD is grateful for NRO's creativity, engagement and leadership in facilitating social change through artistic practice."

New Red Order is also working with the museum to implement a land acknowledgement practice. Increasingly common in Canada, Australia, and New Zealand, land acknowledgement practices are a formal statement that recognizes and respects the Indigenous people who inhabited the land. Beyond that, New Red Order is asking MOCAD to develop concrete practices to continue to build relationships in the Indigenous community.

To that end, New Red Order is forming a Waawiiyaataanong Arts Council to receive input from Detroit's Indigenous community and guide MOCAD's land acknowledgement process. Those interested in joining can do so here.