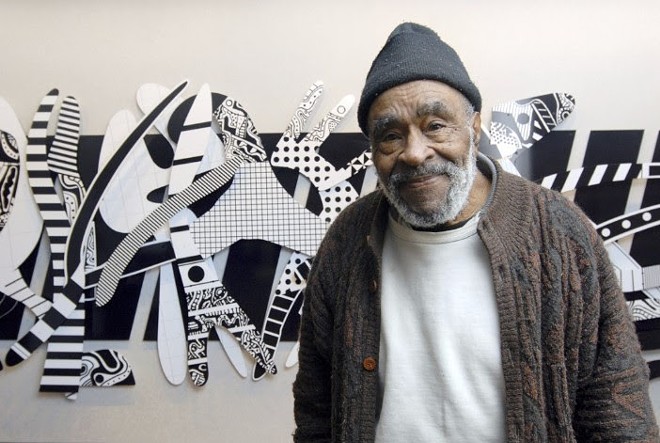 Charles McGee, an iconic Detroit artist known for his bold, abstract murals and sculptures throughout the city, has died. He was 96.

Anthony Curis of the Library Street Collective, which represented McGee in recent years, confirms to Metro Times that the artist died Thursday evening.

When MT interviewed McGee in 2017, he said his journey as an artist started when he was just a boy working on a sharecropper's farm in South Carolina.

"I noticed how the snakes move. And how the days would be longer but very exciting," he said. "You'd stand there and look at a cow, and that was it."

His work often incorporated geometric shapes, either rendered in black and white or in vibrant colors.

"I felt if I could use black and white, which is the greatest combination of opposites, it would speak the strongest language and I could speak it," McGee told Metro Times. "I feel if I'm going to put it out there, I want it to be strong."

Though McGee had a stroke in 2011 that limited his movement ever since, he never stopped working, partnering with other local artists to realize his visions.

"I have no choice," he said. "The stroke took a lot of my physicality away from me. But I still think it. I create it, but on a smaller scale. I found that an artist needs to express himself and he will do it regardless. I can't paint physically. But what I do is use somebody else's talent to create some kind of something that they can get it painted for me."

In 2016, a black-and-white sculpture designed by McGee titled "United We Stand" was unveiled at the Charles H. Wright Museum of African American History. The next year, a towering 118-foot tall black-and-white mural designed by McGee called "Unity" was painted on the side of 28 W. Grand River Ave. in Detroit's Capitol Park. The painting was realized by Kelly Golden and Jordan Zielke of the Golden Sign Co., and debuted alongside a sprawling retrospective exhibition of McGee's work, spanning more than 70 years.

In 2019, muralist Hubert Massey restored a vibrant mural McGee originally painted in 1974 on the side of what is now the Detroit Foundation Hotel. The mural is similar to "Spectral Rhythms," a McGee painting from the same era that is part of the Detroit Institute of Arts' permanent collection. Massey told Metro Times he worked directly with McGee to make sure the colors were just right. McGee's daughter Lyndsay told MT she was glad to see her father's work restored.

"I remember him working on it," Lyndsay said. "But I never really saw the finished product as it was years ago. I've only seen it crumbly and old."

McGee has been a central figure in Detroit's community of Black artists. In the 1960s, he led the Charles McGee School of Art, which had an all-Black faculty, and Gallery 7, a showroom for Black artists.

"I think first in terms of quality," McGee told The Detroit News Magazine in 1969. "Black or white, every artist's work must be measured against the best art being produced in our time."

Sculptor James King told the magazine that he believed McGee's work was among the best of the best.

"As artists we are prejudiced about our own thing," he told the magazine. "Yet, we all agree that Charles' work is flawless."