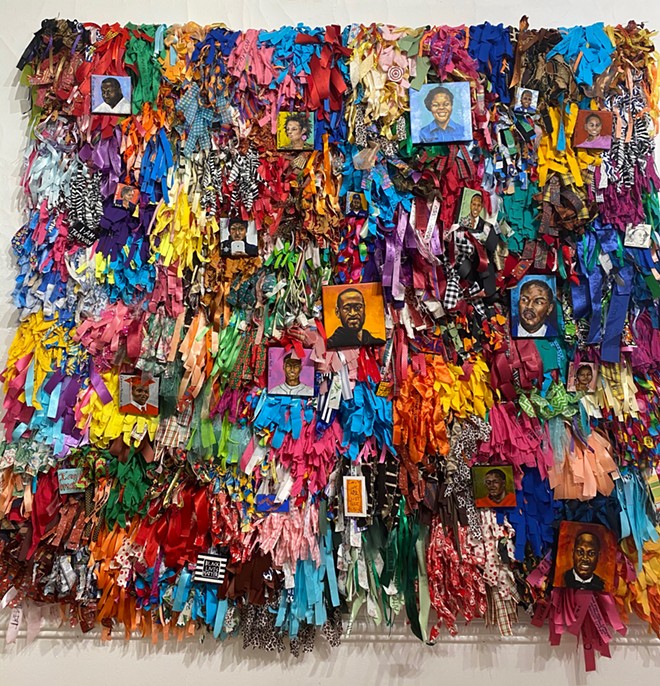 Though it was founded 111 years ago in what is now the nation's largest Black-majority city, the Scarab Club had never celebrated Black History Month with an exhibition — nor had it ever held an exhibition of all-Black artists.

That changes this week with Souls of Black Folk, an exhibition featuring all Detroit artists.

"The Scarab Club, has been serving and supporting the Detroit artist community for more than 100 years," Scarab Club Board president Mariuca Rofick said in a statement. "Our distant past was not always divers, equitable, or inclusive to African Americans. However, our present and future is painted with color — Black and brown that embraces diversity and inclusion in artistic expressions, thoughts and deeds. Souls of Black Folk is a first for the Scarab Club, and as we celebrate Black History Month, we do so by honoring and showcasing the artistic genius of Detroit's Black artists."

The exhibition opened earlier this week but is celebrating its opening reception from 5-8 p.m. on Friday. Masks and social distancing are required due to the ongoing pandemic, and guests are asked to RSVP here.

It was curated by Donna Jackson, an artist and founder of DMJStudio, an arts organization that aims for inclusivity with a focus on bringing art from institutions to neighborhoods.

Jackson says she got the idea for Souls of Black Folk over the summer, as the protests against police brutality following the deaths of George Floyd and Breonna Taylor spread across the nation. The title comes from a quote from W.E.B. Du Bois's 1903 book of the same name, about the duality of a being a Black American:

"One ever feels his twoness — an American, a Negro; two souls, two thoughts, two unreconciled strivings; two warring ideals in one dark body, whose dogged strength alone keeps it from being torn asunder."


"What led me to even writing a proposal [for the exhibition] is of course seeing all that happened in the last year, and getting this chance to kind of take that in as a Black person," Jackson tells Metro Times. "And also COVID giving me a chance to sit and reread a lot of different things, which included this book from [Du Bois]."

Jackson says she was moved by the quote.

"There was just this one quote about the 'twoness' of being a Black person and American, and just what that feels like and what that looked like for him over a hundred years ago," she says. "And in that moment, I was feeling the same way now."

Nineteen artists are represented in the show, all Detroit-based and all Black. They include artists like Carol Morisseau, Sabrina Nelson, Desiree Kelly, Sydney James, and others.

One of Morrisseau's pieces is "The Healing Wall," a mixed-media work that incorporates photos of Floyd and other Black people who have been killed. But other pieces are portraits of everyday Black people, including a piece by James that shows a Detroit woman "in a moment of motherhood," as Jackson describes.

"That was one of the major things for me, telling that Black story from this space, from the city and from people that live in and enjoy the city," Jackson says.

"That's what I hope people see — it's not just about that struggle and that violence that, as Black people, we have endured over centuries," she says. "It's also our day-to-day lives. And I wanted people to see that on these walls — this is who we are from our souls and from our experiences, not just that violence."

She adds, "I want people to come in and really enjoyed the complexity of Blackness in this room."