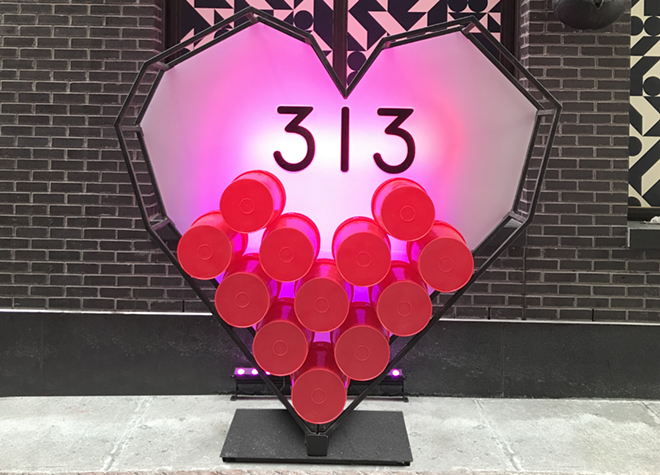 In any other city, March 13 is just another day. But here in the Motor City, we take any excuse to show our civic pride. To celebrate 313 Day, which falls on Saturday, March 13 this year, here's a list of 13 activities to prove your love for Detroit.

Starting at 8 p.m., Foot Locker Detroit, Stream Ticket, and Oh So Radio will celebrate 313 Day with virtual performances by MIA Babyface, Polofrost, Chavis Chandler, and more. The event is free for high school students in Detroit Public Schools Community District. In addition, public admission proceeds will be donated to advancing media training for Detroit youth. The virtual concert can be watched at streamticket.tv.

This year, sneaker and streetwear shop SNIPES partnered with the Detroit Pistons in honor of 313 Day to celebrate artists, community workers and leaders, essential workers, and more. There will be a mobile truck making stops to six Detroit SNIPES locations, as well as making stops to hospitals, schools, community centers, fire departments, and more. They will provide the community with exclusive shoes, apparel, and giveaways, and also partnered with Detroit Mini Donut to provide coffee and doughnuts as a community engagement. In addition, local artists such as Ijania Cortez and Terry Childress will be doing pop-ups at different SNIPES locations for paintings and shoe customizations.

The first annual Players Ball is a charity basketball game and shoe drive for Extra Push Youth Foundation. The event is from 3 p.m.-7 p.m at St. Cecilia’s Gym with three basketball games. Entry is free if you bring new or gently used shoes to donate, and $20 without a sneaker donation. There will be a 100-ticket limit with limited capacity.

Clothing brand Born x Raised partnered with the Detroit Pistons to honor the city’s culture and spirit. They have created limited edition Pistons jerseys that read “Born x Raised” with the numbers “313” on the back.

National Geographic’s Genius: Aretha will be screened at the Monroe Street Drive-In Powered by Emagine on 313 Day. The free screening will be first-come, first-served. Gates open at 6 p.m., but guests are recommended to arrive early in order to guarantee a spot in the screening.

To celebrate 313 Day, La Taco Bae is offering pick-up and delivery orders for her egg rolls served with rice and beans. You can get three egg rolls for $13 or $5 each. Egg rolls include birria, vegetarian jackfruit mole, and chicken enchilada egg roll. Orders can be placed at latacobae.org.


8. “Detroit: The Blackest City in America”

In honor of the city that is 80% Black, @jonxgenius is releasing limited graphic T-shirts that read, “Detroit: The Blackest City in America” on 313 Day.

What’s Detroit without a coney island on every corner? @Ghettokidscam is releasing “The Ghetto Kids Coney Special” which includes a tee, hat, coney box, coney bags, hat buttons, and a sticker pack.

Get a sweet slice for 313 Day. 313 Sweets is selling cakes, pies, slices, and more from noon-5 p.m. at Brightmoor Artisans Collective.

Melinda Anderson of Studio M Detroit partnered with Bedrock Detroit and Prop Art Studio to place a 313 Day installation in Parker’s Alley. The heart-shaped structure with "313" in the middle is the perfect spot to take 313 Day selfies.

Pepsi collaborated with Detroit artists and organizations for 313 Day to celebrate what being a Detroiter is all about. “Full of Detroit Soul” features art by Désirée Kelly, Ndubisi Okoye, Sydney G. James, and KEM. They bring out the spirit of Detroit in Pepsi’s campaign through music, murals, drawings, paintings, and more. The company also launched a limited-edition packaging design and a promotion for $3.13 off on DoorDash orders for anyone who adds a Pepsi to their order on Saturday, March 13 from more 2,000 area restaurants. More information on participating restaurants is available at FullOfDetroitSoul.com.

Amber Lewis, aka @socialinthecity directed "Detroit Gold," Foot Locker Detroit’s campaign for 313 Day. "We will use various mediums to display an appreciation for the people who have contributed to modern Detroit culture," she says. The campaign features Streetlord Juan, Charity, Payroll, Lana LaDonna, Babyface Ray, and Earlly Mac. "While all of their art is different, they are equally important in our identity," she says. There will also be digital content released on @footlockerdetroit directed by Amber M. Lewis and produced by Darrien Pope, Lancer Casem, Jimmy Goldfingers, Kenny Wilson, Aaron Dawson, W$Kharri, Lauren McGrier, and DaTrice Clark. Foot Locker Detroit will also be giving away 50 T-shirts at the Foot Locker Detroit community store designed by @jonxgenius.