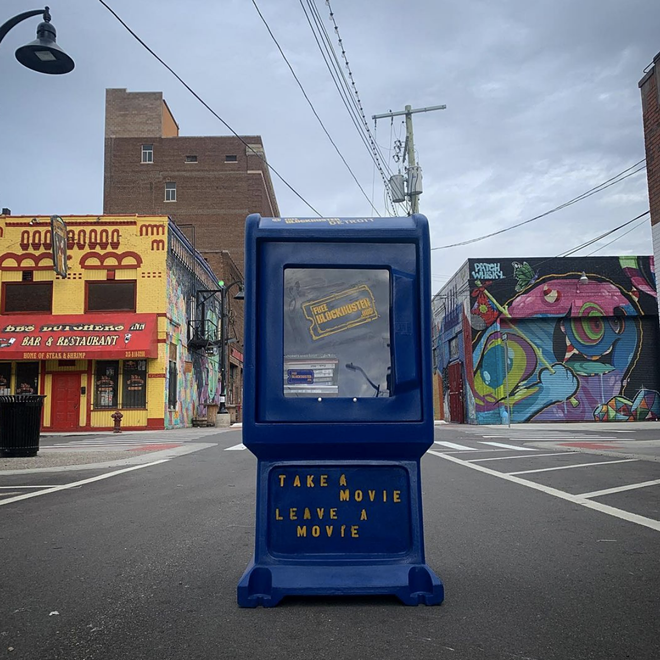 As a kid, Toscano and his brothers stormed the aisles of their local video store to put their new VHS player to work. Among the titles snatched: Bill Murray's Stripes and 1977's The Incredible Melting Man, which, according to IMDB.com, is about “an astronaut who is transformed into a murderous gelatinous mass after returning from an ill-fated space voyage.”

Years later, Blockbuster, Family Video, and most other video rental chains haven been utterly decimated by streaming services, not unlike the aforementioned melting man. (Well, there is one last remaining Blockbuster store, which is the subject of, get this, a newly released Netflix documentary. Oh, the cruel irony!)

But now, Toscano is joining fellow movie lovers across the country by bringing the old-school Blockbuster experience to life — and to street corners.

“Blockbuster was a big deal,” he says. “I talked to my wife and was like, I kind of miss going to a video store. To some, it may be an inconvenience, but it was an experience. My kids don't know what I'm talking about,” he adds. “I would have loved to have done that with them, cruise around and pick movies out.”

Toscano, who grew up in Eastpointe, learned of a project called Free Blockbuster boxes when he discovered one in Philadelphia. The box is similar to those tiny free libraries that have sprouted up in neighborhoods and public spaces, where folks are encouraged to take and leave a title, or the free community fridges that have spread across the U.S. amid the COVID-19 pandemic. But instead, the Free Blockbuster box offers folks an opportunity to relive the spontaneity associated with the long lost days of video stores, but, of course, without the pesky late fees.

“I immediately thought we need one in Detroit,” he says. “More than needing one, I was just motivated to make one.”

He reached out to FreeBlockbuster.org, the California-based nonprofit organization that, as Toscano says, offers advice and support as to how to get a Free Blockbuster box up and running. (It doesn't provide the box, though it does sell stickers, stencils, and magnets.) So Toscano found a filthy and abandoned newspaper box at a strip mall (and, no, it wasn't a Metro Times box, we asked) that had an empty tallboy can nestled inside.

After hauling it away and hosing it down at a car wash, Toscano took it to FREE AGE Productions in Eastern Market, where he and his co-workers Danny Gianino and Gian Luca Petrazzi sanded the box down and gave it a fresh coat of paint and some stenciling. Thus, Detroit's first Free Blockbuster was born.


The box, which sits in a high-traffic area at 2468 Riopelle St., Detroit, and within eyeshot of FREE AGE, was installed last week and has already gained a lot of attention, as well as a steady flow of DVDs, VHS tapes, and curious passersby. Toscano even put some movie theater candy in the box, but says that it got swiped within 15 minutes.

Since installing it, he has watched people crowd around it and, once the @freeblockbusterdetroit Instagram account started to take off, he joked with his co-worker that maybe they stumbled onto a good business idea: a place to rent movies.

Toscano says that they have plans to put another Free Blockbuster box in Hamtramck, and says he checks in with the box each day to make sure there isn't anything “too crazy” in there.

“Someone just asked if there was an adult section,” Toscano says. “I thought, it would be funny to have a little curtain in there or have a spot in the back of the box.”

Though X-rated flicks will likely not get placement in Toscano's box, he hopes that it will serve as a way for movie lovers to tap into the nostalgia for those old video rental stores and to bring the community together, one melting man at a time.

“The one thing we talked about, we hope people don't just dump garbage DVDs and VHS no one wants,” he says. “We hope that every once and while there are quality films, cult classics, B and C movies, independent films, and that it becomes a destination for people.”

Oh, and as always: Be kind, rewind.