Last year, Bedrock Detroit tapped creative director Melinda Anderson to help activate Parker's Alley, the row of shops behind the Shinola Hotel named after Thomas Parker, one of the first Black landowners in the city. Initially, Anderson was hired to help activate the space with event programming.

Then, of course, the pandemic happened, and Bedrock and Anderson had to pivot. Instead, the new plan was to create an "Instagrammable moment."

"I said, OK, well, Detroit is a very proud city," she tells Metro Times. "We love our city. We love to represent our city. We always are wearing it proudly in paraphernalia. And you know, that only parallels with New York — like we are the ones that would really see people out with their gear on wherever they are."

Anderson works as Studio M Detroit and previously served as creative director for Detroit Month of Design. She has also designed a number of art installations throughout the years, including designing the VIP section at Movement electronic music festival and a 10-foot-tall boombox at the entrance of the festival one year.

"I would call myself a designer," she says. "It really depends on the project."

For Parker's Alley, Anderson sought to create something that would "capture people's attention, bring joy, uplift spirits during this dark time, and also encourage civic pride." What Anderson calls the "313 Heart" launched on Valentine's Day as part of "#DeckedOutDetroit," Bedrock Detroit's campaign to bring people back to downtown businesses as pandemic restrictions lifted.

The project was only supposed to be up for a couple months, but Anderson says it got a boost after Metro Times included it in a 313 Day listicle. Since then the project has become an "ever-changing" art installation that has gotten tweaked for various holidays. For Saint Patrick's Day, Anderson added a rainbow created out of flowers. Now, for the Detroit Tigers' Opening Day, it features our baseball mascot, utilizing a painting created by collaborator Ryan Wheeler of Prop Art Studio. 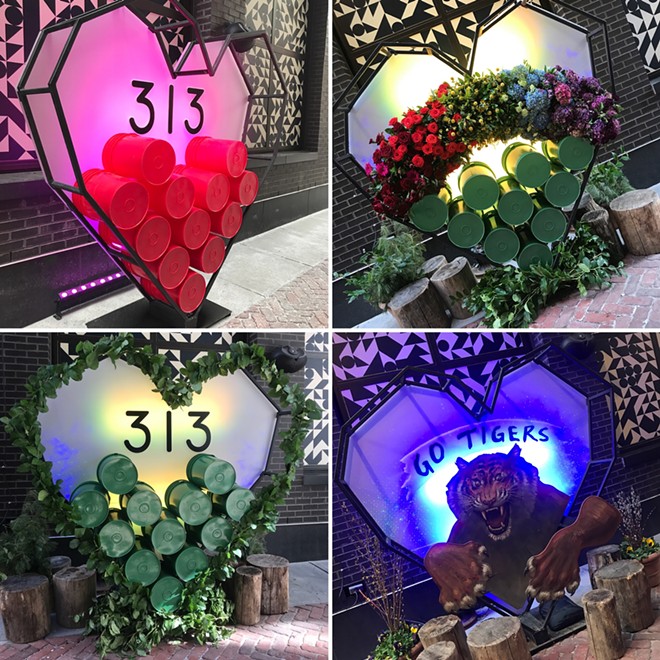 Anderson says the installation has become so popular that Bedrock Detroit decided to extend its stay in Parker's Alley for the foreseeable future.

"The thought was originally, we wanted to bring more bodies to Parker's Alley in a safe way," she says. "So we can't have big events, but what we can do is encourage people to come downtown for a retail shopping experience. And then it's like, choose your own adventure — you come, maybe take a selfie with installations, then you might want to grab a bite to eat, you may want to do a little shopping while you're there because you've already parked."

Anderson is also working on other projects that she hopes will help activate other parts of Detroit. In 2019, she was awarded a $25,000 grant from the Knight Arts Challenge to build "Electric Fruit," a mobile art installation that Anderson describes as like "a futuristic fruit stand" that doesn't sell fruit but rather the work of Black artists and designers. Anderson plans to take Electric Fruit to Detroit neighborhoods to bring art and pop-up performances to the community, all while highlighting Black artists.

"I felt that through my previous work, that there still needed to be almost an arrow to highlight that community," she says.

She is also planning to help the Independent Business Association in Detroit to reboot the Light Up Livernois event this summer to help highlight Detroit's Avenue of Fashion. The historic shopping district has been hit hard by a construction project that choked off traffic throughout much of 2019, and then the pandemic in 2020. Anderson says Light Up Livernois 2021 is planned for July 3.

"These kinds of installations, I think they hit a home run in pulling people in to understand more about design and to just bring a little happiness and joy," she says. "And so I want to continue with my work in this vein because sometimes I am doing installations that may have a more serious side, but I really believe in bold and courageous design. To me, design that's colorful and bright and inviting is courageous. ... Anything done during this time through a global pandemic, that's courageous."