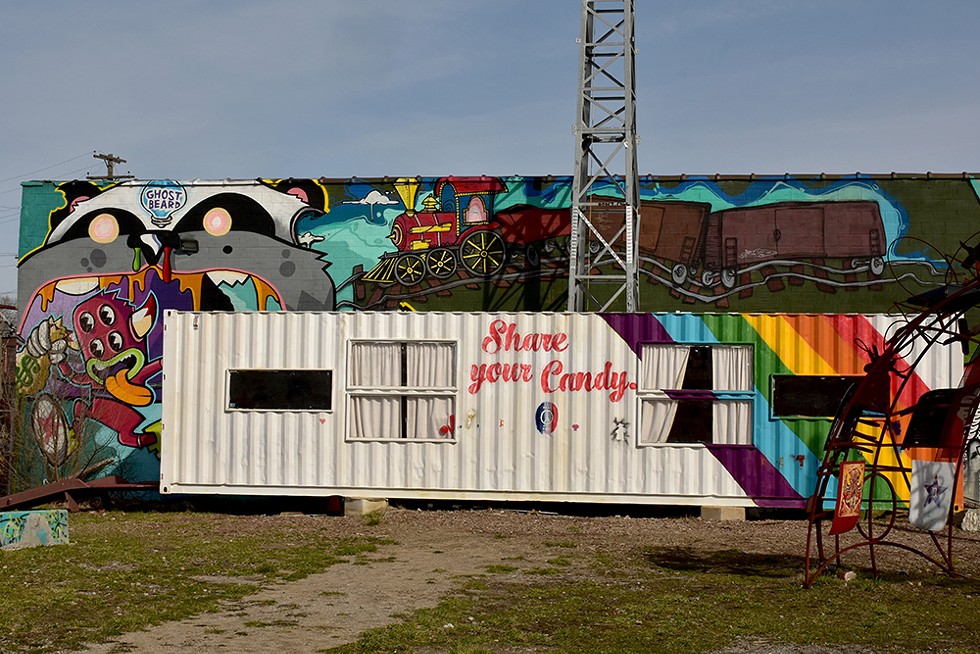 The first place artist Matt Naimi lived in Detroit was on the top floor of downtown’s Cary Building, where he says rent was $750 a month, utilities included, and afforded him a “wraparound” view of the implosion of the nearby former Hudson’s Department Store in 1998. And when video artist Oren Goldenberg got his first place in the city’s Cass Corridor, rent was just $200 a month. “I didn’t have a bed,” he says. “I would roll up a foam mattress, work during the day and night, and then sleep.” While living there, he made his first film.

In the years since, the two have watched the cost of housing in Detroit climb along with its reputation nationally and internationally as a city that was friendly to artists. They saw it firsthand through their work with Recycle Here, a recycling center and events space Naimi started in 2007 in a former car factory in the city’s Northwest Goldberg neighborhood, and its adjacent Lincoln Street Art Park, where people from the art scene gathered under the “Freak Beacon” among sculptures made from recycled materials and colorful murals from some of the biggest names in Detroit street art. It was also known for hosting offbeat parties that could draw thousands — and occasionally, the attention of police.

Throughout it all, Naimi has long maintained a Burning Man-like philosophy for the project, eschewing activity where money changes hands. It's an ethos best summarized by the motto spray-painted around the complex: “Share your candy.”

“We all see the rents going up and our friends getting displaced,” Naimi says. “The fact that people are moving out of Detroit to Ferndale because it's affordable, it was shocking to me, having been here for 20-plus years.”

Now, the two have partnered to reimagine the space as Dreamtroit, a $20-million development that will transform the complex into a mixed-use housing development. The plan will keep Recycle Here and the Art Park, while adding amenities like a coffee shop, a market, and an events space.

In recent years, it seems like there’s a ribbon-cutting for a new housing development every other week in Detroit, but most importantly, Naimi says the goal will be for rents to truly be affordable for artists, with a plan for communal units that share kitchens and bathrooms to start at about $365 and single-unit studios ranging from $500-$1,100. People can also both live and create art in the space.

“It’s really, like, ‘I just showed up to Detroit and I’m broke, where can I live?’” Goldenberg says of the price point.

The two say that the project, which has been in the making for nearly four years, started as they were just trying to find ways to preserve the building, which was in bad shape. A collapsed roof rendered much of the building unusable, and in recent years it has housed Recycle Here’s offices, storage space, and some music recording studios. “The rest of the footprint was basically vacant,” Naimi says. “Our core idea was just the sustainability of our projects that we had going there. And then we had the asset of the building. Well, it really wasn't an asset — it was a crumbling piece of property that we were trying to rehab.”

He adds, “Right out of the gate, we were not thinking of housing of any type. We were thinking more industrial and commercial. And kind of just the way money flows, in order to pull projects off ... we had to make a decision. I mean, we didn't want to be the developers of condos. We wanted to create something that would actually suit the culture that we’ve created there.”

Before it became Recycle Here, the building belonged to Naimi’s father’s grocery distribution company, and was used through the ’80s and ’90s. But the building has a strong historical significance, too: Originally built in 1908 for the Warren Motor Car Co., it later became the first Lincoln Motor Factory in 1917, and began producing Model T’s after Ford Motor Co. took over in 1921.

That history allowed Naimi and Goldenberg to get the complex added to the National Register of Historic Places in January, which allowed for historic site tax credits. By adding housing, the project was also able to get funding from the Detroit Housing for the Future Fund, an affordable-housing initiative that has funding from JPMorgan Chase and the Kresge Foundation.

While many housing developments in Detroit get tax incentives to set aside a small number of units for affordable housing, the Dreamtroit plan calls for the majority of its units to be affordable, or 58 of the 81 units. Of those, 17 will be reserved for households at or below 50 percent area median income, 41 units at 80 percent AMI, and the remaining below 120 percent AMI.

The two say they are so committed to making Dreamtroit affordable for artists that they don’t expect to make any money off of it.

“We kept saying we'll forgo any profit and returns,” Goldenberg. “So it made us unable to get traditional investors, but that kept luring more lenders to the mission who believed in what we were doing.”

It was also important for them to keep the Recycle Here program. That project started on a lark when Naimi began leasing space in the complex to a waste-hauling company, and on the advice of a friend, applied for a permit from the city to process waste. The city wound up issuing one in error and later tried to rescind it, but Naimi countered and they let him keep it. Today, many Detroiters depend on Recycle Here to recycle their waste since the city’s curbside service is for single-family households — it doesn’t go to people who live in multifamily dwellings of more than two units.

“We always operated from the thinking that, you know, it's been operating for 15 years,” Naimi says of the accidental recycling program. “And if we shut it down, there's no guarantee that the city will open it back up.”

During the pandemic’s initial stay-at-home order, Recycle Here briefly shut down and moved to a different part of the complex off Lincoln Street so the construction project could begin.

Naimi says he found it touching to see people regularly come to Recycle Here throughout the pandemic to sort their own waste.

“People would show up at all hours of the day and night with their cars full of recycling, and it's like, they just can't throw it away,” he says. “There’s a global pandemic right now, and these people are like, you know, ‘I've got to recycle my styrofoam.’ You think they’re crazy, but it kind of warms your heart. You're like, ‘Alright, man, the zombie apocalypse is upon us,’ and the recyclers are diehard, believing in the planet. You got to love it.”

Speaking of recycling, Naimi says due to the historic designation, the development will see parts of the building destroyed as part of the construction, including of some of its well-known street art — though Naimi says they plan to keep a mural by the late Jordan “Tead” Vaughn, an artist who died after falling through a roof at the site in 2017. Other parts will be restored to how they looked when the complex was a car factory. That includes the excavation of a structure Naimi calls the “freezer,” which has long been in disrepair. Naimi says once completed, people will be able to go inside. “It's allowing us to take a snapshot of that decay and preserve it,” he says, adding that the hope is to partner with a local events company to provide regular programming inside it.

What this all means is that the party isn’t over at Lincoln Street Art Park. In fact, they now have the blessing from the City of Detroit as part of its 24-hour Economy Initiative to reinvigorate the city’s nightlife. The $50 million expansion of the nearby Motown Museum, which also includes an events space, will also help anchor the neighborhood as a nightlife and events destination.

“There will actually be more partying on site,” Naimi says, adding that they hope to be able to reopen the Art Park in the fall.

But Naimi says he’s looking beyond that. Hopefully, by offering artists affordable housing, it can help continue to make Detroit a destination for creatives, and maybe even help them become future homeowners in the city.

“It could be the first stop to home ownership because you're not paying all that money in rent and …you’re paying it in a place that’s affordable,” he says. “Detroit is still a fairly reasonably priced city to buy property in.”

He adds, “This is a Detroit project that we’re making for Detroit, for everybody here. … We want everybody to be welcome and feel invited to our place. And the city led to the creation of this. I mean, everything steered ourselves to be able to make this dream come true.”

Construction is expected to be completed next year.