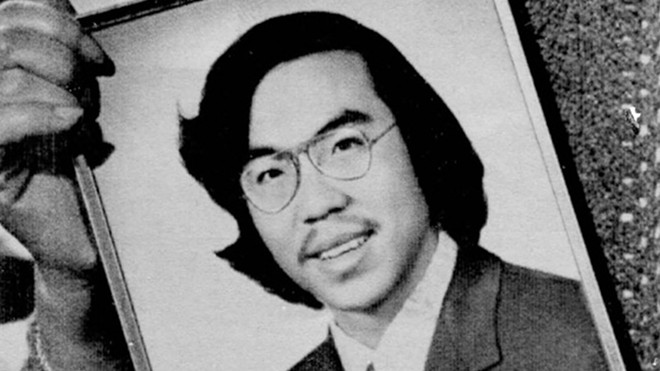 In 1982, just eight days before Chinese-American automotive engineer Vincent Chin was to be married, two white men brutally beat him outside of the Highland Park strip club where he was celebrating his bachelor party. Chin, 27, died four days later as a result of the injuries inflicted upon him by two autoworkers who mistook Chin for being Japanese.

A dancer at the club recalled one of Chin's attackers shouting at the groom-to-be: “It’s because of you motherfuckers that we’re out of work.”

The case is the subject of a 1987 documentary, Who Killed Vincent Chin? which explores the events that led to Chin's beating, how his attackers Ronald Ebens and Michael Nitz managed to avoid jail time (paying just a $3,000 fine and three years' probation), and how the incident was a catalyst in the fight for Asian-American rights.

Chin's slaying will be at the heart of a virtual event hosted by Cinema Detroit along with Over the Moon Detroit and the Freep Film Festival. The event will take place at 7:30 p.m. on Wednesday, April 21 and will include an online screening of the Oscar-nominated documentary, followed by a panel of speakers that will discuss the film and how Chin's murder directly reflects the current state of hate crimes, racist attacks, and discrimination against Asian-Americans and Pacific Islanders.

Just two months shy of the anniversary of Chin's murder, the country continues to reel from last month's shooting spree that targeted massage spas in Atlanta, ending the lives of eight people, many of whom were AAPI women. Meanwhile, hate crimes against Asian-Americans have been on the rise since the start of the pandemic, rising 150% from 2019 to 2020, which is when former President Donald Trump stoked violence and popularized hateful language like the “China virus” in the public lexicon.

Speakers for Wednesday's event include the documentary's executive producer, Juanita Anderson; activist and founding member of Over the Moon Detroit, Esther Kim; Scott Kurashige, a Detroit-born professor and chair of Comparative Race and Ethnic Studies at Texas Christian University; Jasmine Rivera, a filmmaker, teacher, and communications director for Rising Voices of Asian American Families; and Paula Yoo, author of the forthcoming book From a Whisper to a Rallying Cry: The Killing of Vincent Chin and the Trial that Galvanized the Asian American Movement.

Tickets for Wednesday's virtual screening and discussion are $8 and can be purchased via goelevent.com/freep. A portion of the proceeds will benefit UCLA Asian American Studies Center Friends of EthnoCommunications.