Get sticky with it: the Gathering of the Juggalos is on for 2021 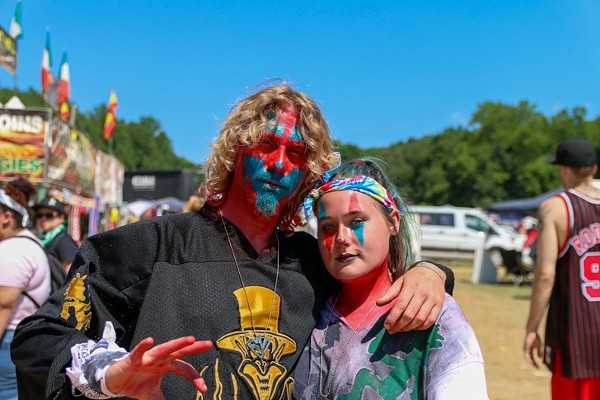 Yeah, yeah, we get it. Nature is “healing” or whatever now that we have some sick vaccines (hopefully) coursing through our veins as events rapidly fill our cobweb-covered calendars. But you know what else is healing? Our hatchetman protected hearts, because the Gathering of the Juggalos is back, baby. Whoop fucking whoop!

The annual Psychopathic Records-hosted event, dubbed “the biggest family reunion on the planet” (which, like most events, was canceled last year) is officially on for Aug. 19-21, according to an announcement made by #Resistence leaders Detroit's Insane Clown Posse aka the Juggalo gods.

“This great and hallowed jubilee of Juggalo souls will feature the unbreakable bonds of a tribe that has traveled lifetimes, running and chopping through every obstacle, with hatchets in our hands and clown luv in our hearts,” the announcement reads. “Know this, straight from the depths of our souls: This will be a Gathering for the True Juggalos. The chosen. The Family!”

Per the announcement, the 21st annual Gathering promises to be different from past gatherings as organizers work to “rebuild” the event touted as the greatest show and the dark carnival. What won't change, however, is the Gathering's location, which will return to its usual haunt at Nelson Ledges Quarry Park in Garrettsville, Ohio where thousands of Juggalos will gather in face paint, sporting hatchetman apparel, joyfully submitting themselves to sticky Faygo soda showers.

“It will be a new fire. A new moment in Juggalo history, as we rebuild, refresh, renew, and rise, igniting the spark of our new dawn together.”

No ticketing info was included in the announcement but is expected to be released in the coming weeks.

Revisit the luv, mayhem, and whatever this is, via Metro Times' photo gallery featuring 2019's Gathering. Now pass the effing Faygo.