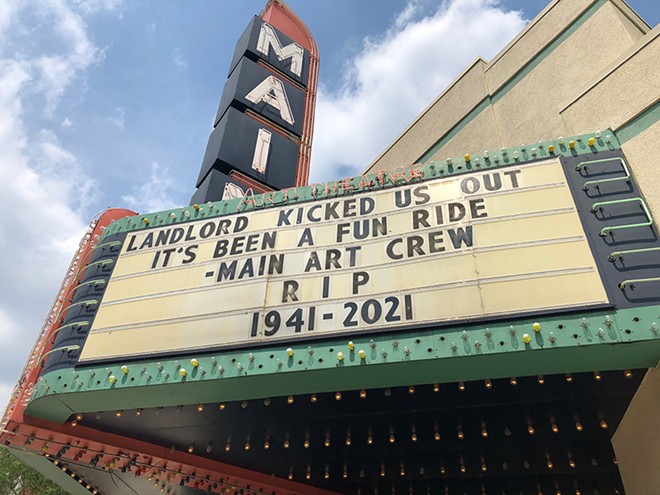 Metro Detroit's movie-going experience just got a lot less indie, as the Main Art Theatre in Royal Oak says "goodbye" after 80 years of service to the community.

On the marquee of the theater on Saturday, the message read, "Landlord kicked us out. It’s been a fun ride -Main Art Crew RIP 1941-2021."

The owners could not be reached by Metro Times on Saturday.

Opening its doors in 1940, the theater initially had a single screen and entertained the community for years until modern film consumption habits demanded more, and it eventually added two more screens. In 1997 the Landmark chain bought the theater.

The Main Art Theatre was known for its eclectic screenings, often offering foreign and indie titles otherwise overlooked by their movie chain colleagues, as well as midnight showings of cult films.

It was also known for its downtown location, surrounded by restaurants and bars. In the body of Royal Oak, Main Art was the forever beating heart.

However, in April, the theater temporarily closed amid the pandemic, ensuring their patrons they would re-open.

The nation’s independent movie houses and theaters begged for financial relief and grants to continue to stay open. Unfortunately, the Main Art suffered under the weight of late-stage capitalism, and the promise of a new day was taken from them.

With the big chain Emagine theater opening next door in 2011 and the convenience of at-home streaming becoming ever more popular, an indie theater seems to be more of a luxury than a viable business.

If the pandemic has taught us anything, it’s that people demand their art but refuse to pay for it or put any extra work into attaining it. So it’s no surprise that another theater has to close its doors, and the fact that it’s now a piece of history only matters to the community to which it belonged.

While the world begins to re-open, one movie house will stay closed, and the community will grieve at its doors, but this won’t be an isolated incident. Funding for arts has always been the last priority, and it doesn’t look like that will change anytime soon.

Thanks for everything, Main Art. We’re going to miss you.