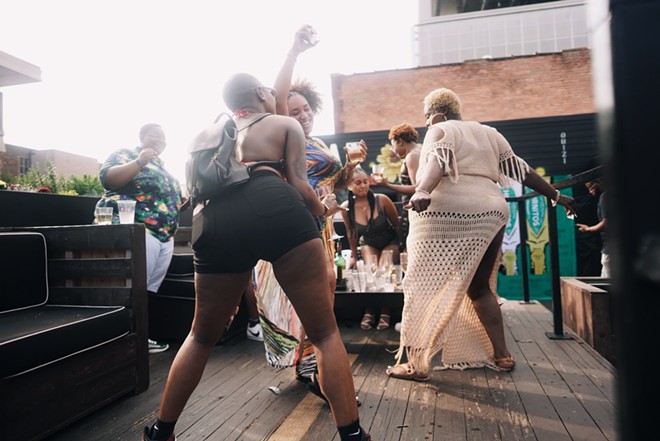 When Chelcea Stowers noticed a lack of quality lesbian nightlife events in Detroit, she decided to take matters into her own hands. In 2017, the photographer created Lesbian Social, a pop-up party with hopes to create a safe space for lesbian women downtown.

“I started with the hopes of creating a lesbian pop-up event in the city to allow women to meet, connect, and enjoy themselves,” Stowers says. “When I first started, I had a hard time finding the ideal location and my first event flopped.”

Not one to be deterred easily, Stowers went back to the drawing board, observing and photographing Detroit’s nightlife culture before being connected with her first rooftop venue by one of her mentors.

“Being in the community for so long and having access to nice venues has been a problem,” says Stowers. “Being able to gain access to these clubs and build relationships with these club owners is just the beginning.”

In July 2020, just as restrictions were beginning to lift, Lesbian Social threw its first rooftop event. Stowers points out that her event is curated and hosted entirely by women, with DJ Three Thirteen as the resident DJ.

As Lesbian Social continues to grow, Stowers hopes to take the event on the road, hosting experiences in other cities while creating a fun and safe space for women in the community.

“I want to make this an event where women are celebrated all around the U.S.,” Stowers says. “Next year, I would love to do a Midwest pride that connects Detroit, Chicago, Cleveland, and Milwaukee, and really brings women together.”