After a long pandemic-related hiatus, Hamtramck's women-owned independent hub for cinephiles, The Film Lab, has recently reopened to offer more than movie screenings.

Since opening in 2019, the Film Lab has operated out of a century-old building in Hamtramck, offering an indoor/outdoor cocktail and movie experience.
However, since March 2020, the "microcinema" has pivoted to offering drive-in films as well as virtual screenings and limited-capacity viewings on the Film Lab's patio, which has been revamped and expanded to offer new seating options, fire pits, and a bigger screen.

According to a press release, the Film Lab has focused its reopening efforts on rebranding the space as an art deco cocktail bar and multi-use event space, hosting events including film festivals, live music, podcasts, filmmaker happy hours, trivia, writing workshops, and open projector nights, which invites local filmmakers to screen their work not unlike an open mic for songwriters, comedians, etc. They've also unveiled two private screening rooms which will soon be available to rent. 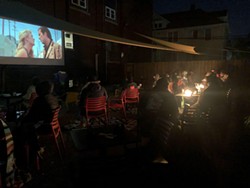 Film Lab's cocktail bar is open Thursday-Sunday from 6 p.m.-midnight with happy hour specials available from 6 p.m-8:30 p.m., while their outdoor patio is open for drinks from 6 p.m.-9 p.m. Movies start at 9 p.m. and run until midnight.

This summer, the Film Lab will host screenings of cult favorites But I'm a Cheerleader, Tucker & Dale vs. Evil, Paris is Burning, and Wan Kar Wai's 4k restoration of Happy Together. There are new releases, too, like Zola, the film that brings a Detroit-stripper's viral 2015 Twitter thread to life, which will be available to watch at the Film Lab starting July 22. The Film Lab will also continue to offer a selection of films available to watch virtually/from home via their website, like Les Notres, Us Kids, and Another Round.