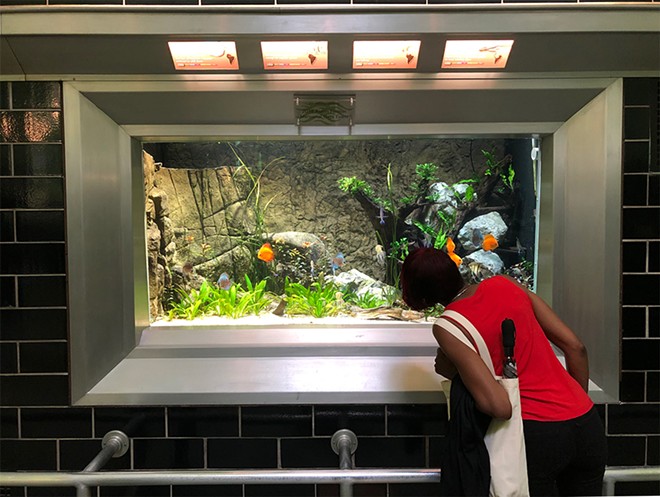 The pandemic was hard on us humans, but we weren't the only ones who felt lonely during the economic shutdown of the past 16 months. The fish of Detroit's Belle Isle Aquarium were also feeling a bit lonely, too.

That's according to the Belle Isle Conservancy, the 501c3 nonprofit that has supported the nation's oldest aquarium since the city of Detroit closed it in 2005 due to austerity measures, raising the funds to reopen it to the public in 2012.

Now, the Belle Isle Conservancy will once again reopen the aquarium to the public on Friday, July 16, for the first time since it closed in March, 2020, due to the pandemic.

During the 16 months of downtime, aquarist Amanda Murray was one of three workers who kept the fish company.

"So fish, they need stimulation," she tells Metro Times during a media preview on Thursday. "When we say that they were bored, it doesn't mean, like, people bored. It just means that their environments have changed. In nature, they're stimulated."

Murray says she would place structures made out of PVC tubes in the tanks for the fish to explore, or add new plants. She also drew pictures for them on the glass walls of their tanks with paint makers.

As someone with an appreciation of theater, Murray says she also sang to the fish.

"I am so good in here because of the acoustics," she says of the Albert Kahn-designed building, whose skylights and green tiles create the sensation of being underwater. "And the fish respond to sound, believe it or not. They'll hear me coming and sometimes respond to it, but it's not because they like my singing. It's because they hear the food coming."

She says her aquatic friends also helped her survive the loneliness of the pandemic.

"Coming here actually made it normal for me," she says. "I think that if I had to work from home, I think that it would stress me out more. But fish, like everybody says, are calming."

Murray says she and two other aquarists continued coming in five days a week during the pandemic. While they were doing that, the Belle Isle Conservancy used the downtime to make $1.2 million in improvements and repairs to the aquarium — a mentality that echoes Detroit's motto, emblazoned on the building: "Speramus meliora; resurget cineribus," or "We hope for better things; it will rise again from the ashes."

"Well, certainly working in a nonprofit is inherently crisis-oriented," Belle Isle Conservancy president and CEO Michele Hodges tells Metro Times. "You're always putting out some sort of fire, and then when you're actually in a crisis, it's really all hands on deck. And that's what's remarkable about this team, is we don't just serve as much as we work. And we rallied and said, OK, how are we going to, one, protect and preserve the aquarium, so that it continues to thrive? And then how do we leverage this time period right now to the best of our ability?"

Hodges says the Conservancy and donors agreed to direct resources toward improvements early in the pandemic, when it was clear that it would be forced to be closed for a long time. "We got our sea legs, so to speak," she says.

The upgrades include the addition of new fish, including garden eels and endangered axolotl salamanders from Mexico, as well as a smallmouth bass caught from the Detroit River. The pagoda-style aquarium at the center of the floor was also renovated, and there's a new mesic woodland forest display, too. Other fish were moved due to outgrowing their existing tanks, or relocated to other parts of the floor to make for a more cohesive experience.

Perhaps the most dramatic upgrades came to the lobby, which had been suffering from peeling plaster. Other renovations include repairing tiles, electrical upgrades, and new paint, which was made to match Albert Kahn's original 1904 design. Many more renovations were made behind the scenes, including a new tank monitoring system, and a "reverse osmosis system," which sounds fancy.

The next-door Anna Scripps Whitcomb Conservatory is also now reopened to the public as well. Following the aquarium's reopening next Friday, it will keep public hours from 10 a.m.-4 p.m. Friday-Sunday.

The Belle Isle Aquairum is located at 3 Inselruhe Dr., Detroit; more information is available at belleisleconservancy.org.