Popular drinking card game tests just how Detroit you are 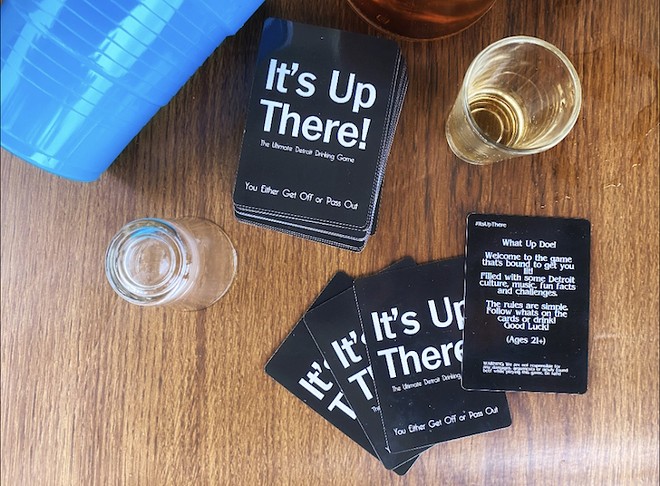 “If you ever dated someone from the East side, take 2 shots (you’re strong).”

That’s an example card featured in “It’s Up There!,” a new card game created by Detroiter DaShuane Hawkins that bills itself as “The Ultimate Detroit Drinking Game.”

The 72-deck card game, released earlier this year and currently sold-out, makes references to local music, culture, and relatable instances that only Detroiters would understand — coney islands, Camaros, Cartier glasses, jobs in the city, local businesses and brands, and more.

“I just kind of thought about Detroit culture, music, or things that would be funny and a little bit petty,” says Hawkins, a Motor City native who sells the game through Detroit Baddie LLC, a brand she founded that celebrates women from Detroit. “At the same time, it could make people relate. So like, when you think of our culture and the things that make us stand out among other cities and states, you’re going to connect to it.”

The game’s title is a slang term, and the meaning changes depending on where you’re from. In Detroit, “It’s up” is another way to say it’s “lit” or “turned up.” (The same phrase could be a threat — think Cardi B’s single, “Up.”) The rules to “It’s Up There” are quite simple: players take turns pulling a card from the deck, and if it applies, take a shot (or a sip, you might not make it through the deck taking shots). Spent more than $700 at Pantheon Club? Take a shot. Represent the Westside? Take a shot. Went to Cass Tech? Take a shot.

As “It’s Up There!” continued to sell out after each restock, Hawkins began to come up with even more Detroit-themed ideas, leading her to create “It’s Up There! Part II.” The updated game includes 108 cards in the deck and more challenges. (Since it’s a drinking game, things can get messy. Hawkins created Part II with more durable cards as drinks can spill while playing.)

“The good thing about the game, too, is that it’s teaching people different things about Detroit that they probably wouldn’t know,” Hawkins says. “I’m a Westsider, so it’s funny. Even when I play it again I’m still kind of stumped because I don’t know anything about the Eastside for real.”

Hawkins says she was surprised at how much attention and positive reviews she’s gotten from the game. She’s hosting a sold-out launch party for “It’s Up There Part II,” where attendees will be the first to play and pre-order the new edition.

She says she plans to release “It’s Up There Part II” to the public by the end of July.

Detroit Baddie also sells branded clothing and posters. Overall, Hawkins says she wants to use her brand to continue to uplift the city’s women. She says she also wants to incorporate resources for Detroit in her brand such as shelters, community initiatives, rallies, fundraisers, donations, events, and more.

Hawkins says Detroit women have a particular type of hustle, grind, beauty, style, and je ne sais quoi, which is what Detroit Baddie is all about.

“A Detroit baddie is someone who is doing the damn thing, that is my whole mantra,” Hawkins says.

More information is available at detroitbaddie.com.