Quandell Wright’s Dearborn garage fashion studio is a masterpiece in messiness, functionality, and ambition. There’s a screen-printing press, a vinyl cutter, and a sewing machine all sitting stoically on makeshift desks. The clothing racks are full of Wright’s “William Palmer Homme” samples and merchandise. There are bikes hanging, a few chairs that don’t belong, and bulletin boards with positive affirmations like “Stop procrastinating.”

“I used to have this stuff in the basement, but I moved it up here when I applied for the CFDA (Council of Fashion Designers of America) award. You gotta have a studio space for the application,” Wright says.

Wright had passed the first stage of the application process in 2020 before the entire year was stopped by the pandemic. But he still made an impression on CFDA president Steven Kolb. “I sent him some shirts, he wore them and posted them on Instagram, and he gave me some great advice,” Wright says.

Wright, 31, originally from the east side of Detroit, has been fascinated by fashion since middle school, and started to cultivate his brand in his early teens.

“My grandfather’s name was William Wright; that was the first name of the brand. He was a designer and a tailor in Flint before he passed away, but a friend of mine had a grandfather whose last name is Palmer, and I just loved the way the two names sounded together,” Wright says.

By 2015 he had purchased his first screen-printing press, sold his first William Palmer shirt for $25, and found mentorship from Bassem Souwaidan; owner of Dearborn-based Al Wissam. “We connected on (Instagram),” Wright says. “I met up with him and he gave me the blueprint. He helped me find manufacturers, told me about trade shows, and how to build a team.” Eventually, Wright was able to put 75 shirts and hoodies in an Al Wissam store.

Wright’s next biggest connection was befriending Detroit influencer and socialite Detroit Bruce. “I met Bruce on one of his tours,” he says. “He began to post my brand and tell people about it. He’s been a big help. Building relationships with people is the best investment you can have.”

Wright takes pride in his ability to connect with people. He sends out hundreds of emails and direct messages a week to companies, influencers, actors, athletes, etc. Comedian J. Will; rappers Icewear Vezzo, Snoop Dogg, and Calico; and NBA player Baron Davis have all rocked the brand. In early 2020, Wright made his biggest splash by partnering with apparel brand K-Swiss. “I connected with K-Swiss CEO Barney Waters on LinkedIn. I made a shirt with the word 'Unity’ on it. It was after the George Floyd murder. K-Swiss added the shirt to their line, and I had my first official collaboration,” he says.

Although Wright understands the importance of partnerships and collaborations, he’s been conscious of not getting stuck on a low price point, because it doesn’t fit the vision of his brand.

“Most of the brands in the city were doing streetwear,” he says. “I felt the culture needed something high-end. I knew the quality had to match. ‘William Palmer’ sounds like quality — I mean, it was meant to be upscale from the beginning.”

Wright is serious when he says “upscale.” William Palmer is the only Black-owned start-up luxury brand in Detroit, and it doesn't have any apparel listed on its website for less than $100. Wright is trying to get an at-bat in a lineup with Burberry, Gucci, and Hermès all hitting before him.

But the rest of 2020’s pandemic proved to be too big of a wall for Wright’s upstart luxury brand to climb, and doubt set in as the opportunities slowed down in the fall.

Wright looks away and then down. “This is all I have,” he says. “Fashion is all I got. I have no Plan B; this is Plan A. I was turning 31 in November. I don’t have a job, and even before that I was working at Crunch Fitness. I was a janitor, cleaning toilets, all because I was chasing a dream. I felt like I needed more time to focus on this. My wife was pulling it all. And it wasn’t sitting alright with her. I was on the verge of losing my family at that point. I needed to make it.”

Next Wright decided to fly to Kanye West’s home in Cody, Wyoming. It was a decision made out of optimism and desperation. Wright has always seen a kindred spirit in West and wanted to get his brand in front of him. “Ye has always been one of the people I admired,” he says. “I had been following him since ’04, ’05.”

Wright flew to Wyoming, checked into a motel, and planned to ride a mountain bike two hours to West’s 52,000-square-foot ranch. However, the bike shop was closed, and he couldn’t catch an Uber or Lyft signal, so Wright decided to walk through rural Wyoming. The two-hour walk turned into four hours and, as nightfall approached, Wright started hearing the sounds of various four-legged animals.

“I am walking forever. I look down and I’m thinking ‘this ain’t it,’” he says. “I’m done. I still had another two and a half hours of walking. I see roadkill. I’m on the phone with my pops and I’m just saying, ‘I think this might be it.’”

Fatigue and the fear of impending doom were forcing Wright to reconsider his entire venture. “I’m thinking about how I’m leaving home, I’m not taking care of my responsibilities, I’m chasing this dream, and I just started crying like crazy,” he admits. 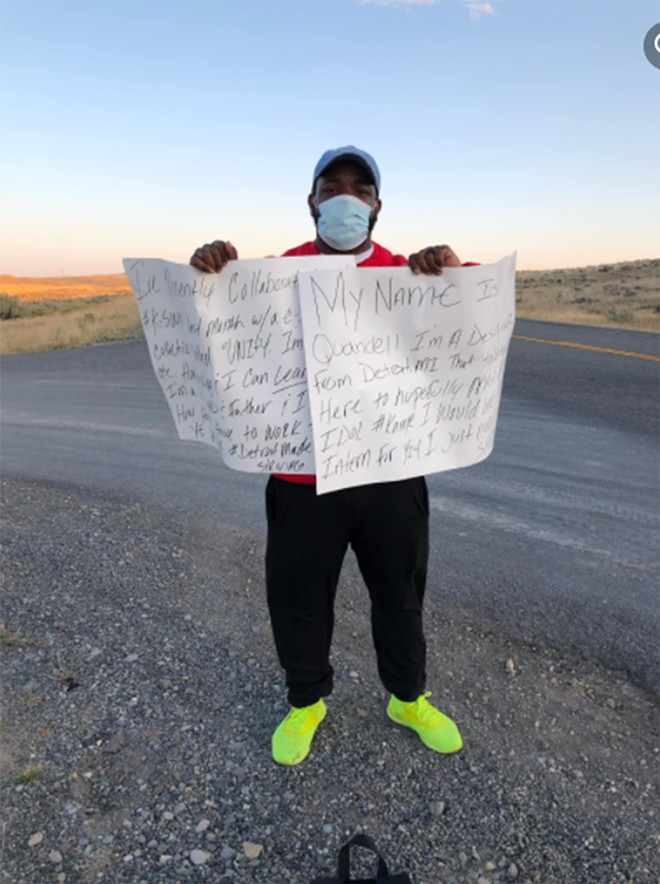 Wright caught a lifeline when a passerby pulled over, drove him to the entrance of West’s ranch, and gave him $40. Wright got out, unrolled two signs that read, “My name is Quandell, I’m a designer from Detroit…” A security guard approached him and informed him that West had just jumped on a jet to Atlanta two hours earlier. Impressed by Wright’s ambition, the guard took a sweater and letter Wright left him and promised to put it in West’s hands.

As Wright began his journey back through Cody, an older white couple pulled over, gave him a ride back to his motel, and Wright gave them the $40 that the previous good samaritan had given him. Two weeks later, Wright received an email from Kanye West’s security guard.

“He said he gave Kanye the package, and he said, ‘He sees you, just keep working,’” Wright says. “I was happy with that. Kanye knows I exist. I mean, the reality is that's something that Kanye himself would have done.”

Wright has his first women's collection dropping this summer and more throughout the rest of the year. His recent bandanna collection was successful, and Wright is still focused on staying positive, grinding, and pushing his brand forward no matter the obstacles.

“Detroit is one of the toughest cities to come out of,” he says. “We are the hustle capital for sure.”