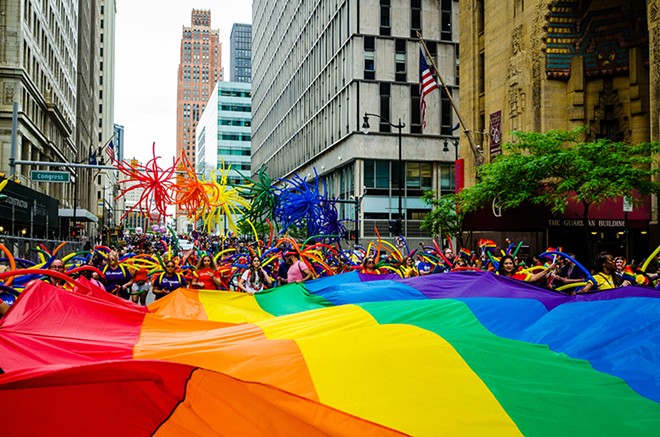 Motor City Pride fest is queer and it’s finally here. After being postponed from its usual Pride Month slot in June, Motor City Pride returns with the rainbow-powered lovefest filled with music, dancing, protesting, parading, and drag. While Motor City Pride is absolutely a celebration, its origins follow in the footsteps of the trailblazers who rose up in the face of oppression, hatred, and violence.

A few years after the Stonewall uprising in 1969 — a major turning point in the fight for gay rights, when police violently raided Stonewall Inn, a gay bar in New York City’s Greenwich Village — Motor City Pride was born. The first iteration in 1972 was a march through downtown Detroit to protest homophobic laws and policies and aimed to earn the recognition for LGBTQ+ rights and equality. It later included a post-march picnic and is now one of the gayest and most joyful celebrations honoring the past, present, and the oh so fabulous future.

This year’s event will once again, center around the Pride Parade, happening at noon on Sunday, Sept. 19 at the corner of Fort Street and Griswold Street. As for entertainment, Motor City Pride will feature performances by Garrison Briggs, Lipstick Jodi, TYLR_, DJ, Ella X, Paytra, Bright Lights, Killer Flamingos, Valerie and the Vulture, and “the bald headed bitch of Detroit,” Sabin Detroit. Until then, sashay away.