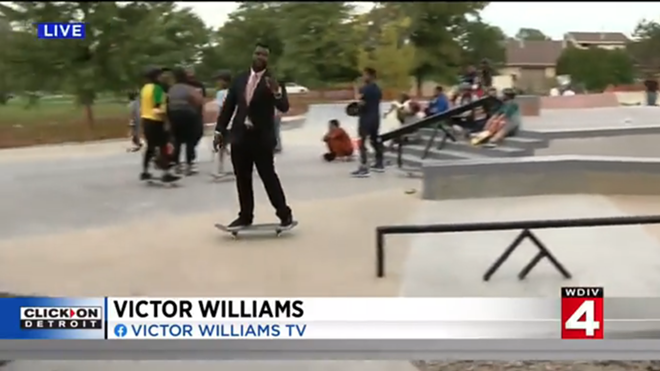 Bro, this is too gnarly for the local news.

WDIV-TV reporter and "resident thrasher" Victor Williams wowed during a Wednesday segment about Detroit's forthcoming Chandler Skatepark, where a 46-year-old man who goes by "Mr. Premium" is offering free skateboarding lessons to kids in the community.

At the end of the segment, Williams, in a full suit, rolls down a ramp on a skateboard, performs a shove it, and then a lip trick — all while continuing to deliver his report live.

"Victor, you are so cool!" anchor Karen Drew gushes at the end of the clip. "I knew he was cool, but that's a whole new level."

Williams says he's been skateboarding since he was 8 years old.

"In all seriousness — as a child, I would have killed for a new park and mentors in the skateboarding community," Williams wrote on Twitter. "Glad to see it’s happening in Detroit."

Chandler Park is expected to open Oct. 23 on the east side. You can watch the clip below or the full segment at WDIV-TV.

Free skateboarding lessons are happening at a new skatepark in Detroit. Of course I had to show the kids something on @Local4News. In all seriousness - as a child, I would have killed for a new park and mentors in the skateboarding community. Glad to see it’s happening in Detroit pic.twitter.com/3fvC8VJvDq