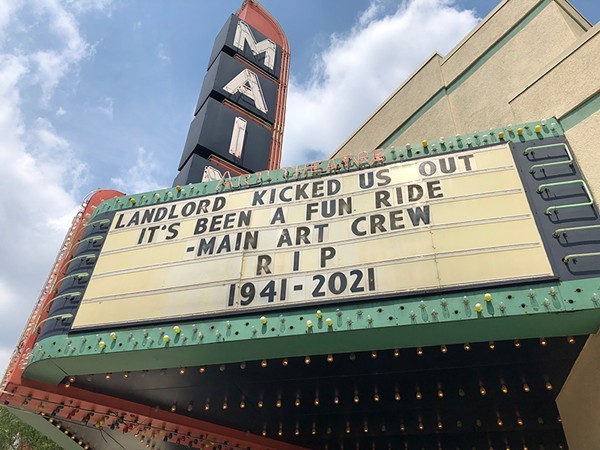 Since forming a few months ago, the nonprofit group, Friends of the Main Art Theatre, has attracted over 1,000 Facebook followers. Members swap memories of the beloved art house theatre and hopeful articles about the future of independent theaters and how institutions like Royal Oak's recently shuttered Main Art Theatre, have managed to escape closure amid changing times and the pandemic.

Not unlike the plot of a film that would most likely be featured at an indie movie house, the group originally launched with one very important, and extremely daunting goal: reopen the Main Art Theatre.

The Main Art Theatre, located on Main Street and 11 Mile Road opened in the 1940s and, until it's abrupt closing in June, served as a beloved spot to catch arthouse flicks, award-winning indie titles, international films, and cult classics, which could be seen through the theater's popular midnight madness programming.

Friends of the Main Art Theatre, which hosts bi-weekly meetings and is led by Jason Krzysiak, a Ford Motor Co. electrician with a loud speaking voice, will host its first fundraiser since becoming a proper 501(c)(3) status nonprofit, in an effort to keep the group moving forward towards its goal, The Detroit Free Press reports. In addition to reopening the theater, the group has also discussed expanding the Main Art into a hub for filmmakers and creatives.

"The films and the culture that are central to this community, I think, have a strong anchor in that building. ... For generations of moviegoers in this area, it has immense significance," Krzysiak said.

The group sort of started after lovers of the Main Art began assembling under its marquee to mourn its closure, which was first announced in April of this year and had been teased as being "indefinite," giving a glimmer of hope that it may reopen. Of course, in June, photos of the Main Art marquee began to surface, as the theater's fate was heartbreakingly displayed: "Landlord kicked us out. It's been a fun ride. ... RIP 1941-2021."

Per the Freep, it was actually Landmark Theatres, the company that operated the Main Art and continues to run many indie theaters across the country, that terminated the lease. Margot Gerber, vice president of marketing and publicity for Landmark had told The Detroit News at the time that the decision to close the Main Art came down to expenses, which the Royal Oak venue had not been able to keep up with in the wake of the pandemic.


So far, Friends of the Main Art are working on building a relationship with Main Art's property owners, A.F. Jonna company. Kryzsiak says they've been "courteous" but have ultimately said there are no plans for the Main Art property as of yet. A.F. Jonna has reached out to other potential operators, like Emagine, which shares a parking lot with the Main Art, but the theatre chain has shown little interest in partnering up.

Royal Oak's deputy city manager, Todd Fenton, has said the group would have to make some progress with A.F. Jonna company in order to proceed with any sort of reopening or restructuring plan.

The Friends of the Main Art fundraiser will take place at Bowlero Lanes & Lounge on Sunday, Nov. 14 from 6-9 p.m. and will include a cash bar, raffle, a DJ, prizes, food, and bowling. Tickets are $15-$150 and can be purchased via friendsofmainartbowling.eventbrite.com.